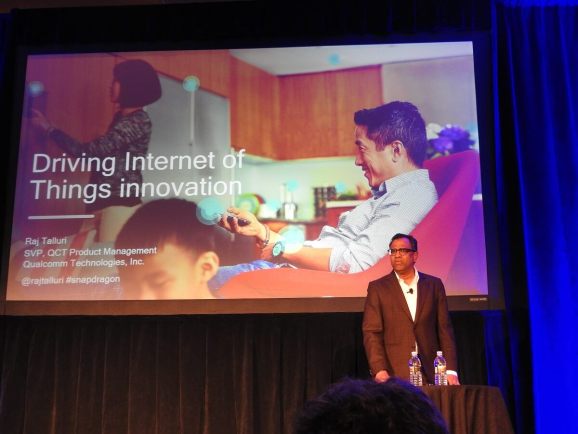 Qualcomm has already shipped more than 1 billion chips for the Internet of Things, which is making everyday objects smart and connected.

The big mobile chip maker made the announcement at CES 2017, the giant tech trade show in Las Vegas this week.

Raj Talluri, senior vice president of product management at Qualcomm, said that mobile technology will drive the Internet of Things (IoT), partly because product cycles are so fast.

“We have scale,” he said. “We launch more than a billion mobile products annually.”

Talluri said the billion IoT chips are being used in connected devices of all kinds, from TVs to sensors. (He said Qualcomm doesn’t count tablets or smartphones as IoT devices.)

Talluri highlighted a few wearables that use Qualcomm chips. He said Snapdragon is used in more than 80 percent of Android Wear smartwatches. A new one coming is from Swarovski and will be at a show in the future, he said.

He noted that Osterhout Design Group (ODG) is using the new Snapdragon 835 processor for its latest ODG R-8 and R-9 augmented reality smartglasses.

He also said the chip is going into Mobi’s Mattel Aristotle, which is the equivalent of Amazon Echo, but for kids. You can do things like play music for the kids by using voice commands and tapping into the artificial intelligence in the cloud.

The company is also targeting the automotive industry with chips for self-driving cars and other electronic functions, such as car connectivity and environment sensing. Cars need advanced chip functions, like computer vision for sensing the environment and other vehicles.

Qualcomm is putting its Snapdragon 820A processor into cars right now. Volkswagen will use the 820A processor and the Snapdragon X12 and X5 LTE modems in its future vehicles. And Qualcomm, Ericsson, and others will field test the automobile connectivity technology this year.