Intel CEO Brian Krzanich held his company’s CES press event inside virtual reality, as Intel provided more than 260 VR units in chairs for all of the press attending the event. As he did so, he showed a number of live events in VR.

Intel’s people began prepping the VR setup before Christmas, and it ran miles of wire through the press event room in doing so.

Intel has a habit of doing big stunts at CES. In years past, Krzanich has had BMX cyclists on stage, drones, and a big floating whale in augmented reality. I’ll report back in a bit to tell you how this goes. 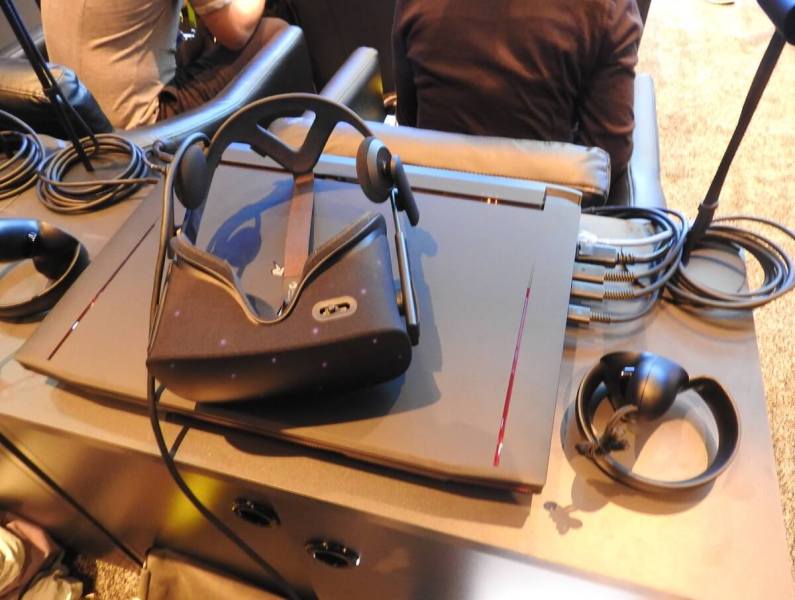 Above: Intel had an Oculus Rift headset at every seat at its CES 2017 press event.

Intel had plenty of tech support people on hand, with big screen warnings to take your headset off if it makes you dizzy or disoriented. It’s a first for CES, though other companies have done something similar. Nokia had a press event in VR when it launched its Ozo VR camera.

Laura Anderson, a spokeswoman for Intel, said, “This is the most technically difficult event we have ever done.”

His answer, of course, is Moore’s Law, the prediction that the number of transistors on a chip doubles every couple of years. He said Moore’s Law is alive, and that Intel has operational chips that are built with a 10-nanometer process. He added that Intel plans to ship 10nm chips (where the circuits are just 10 billionths of a meter apart) by the end of 2017.

Krzanich said that by 2020 the average person will generate 1.5 gigabytes of data per day.

In the first VR demo, Krzanich showed us all what it’s like to jump off a cliff and parachute through a desert valley. Intel also talked about how the tech for capturing and showing VR is moving forward.

Ted Schilowitz, cofounder of HypeVR, came out on stage to talk about computer vision software. The second VR demo showed a waterfall in Vietnam, with every frame consisting of 3 gigabytes of video data. It really felt like I was there, except there was an annoying green line running down the side of the screen that sort of spoiled the experience for me. (I clearly just had a flawed unit.)

Krzanich said that VR will likely change the way we do work as well. He showed another demo where a technician had to go out and inspect solar panels in a solar array. Drones have been used for this work, but you can’t really see a lot at once that way. With this VR demo, I could look around in 360 degrees and inspect the solar panels from my point of view.

The interesting thing about the demo is that it was live. We were really looking out over the arrays spread throughout the Mojave Desert, in real time, and watching it in VR.

As for entertainment and fun, Krzanich said viewers will decide what seats they have at a sports event or a concert. He showed what the view looks like, in real time, within VR at a basketball game. I could see what it was like on the floor of the Villanova versus Butler NCAA game. The VR demo used Intel’s Voke VR sports technology.

“This is the future of sports viewing,” Krzanich said.