Ambarella has carved out a niche in video compression and image processing chips, generating $100 million a quarter in revenue. And today, the company is launching three new chips that will bring next-generation imaging features to cars, drones, virtual reality, and sports cameras.

Santa Clara, Calif.-based Ambarella showed off the three new chips at CES 2017, the big tech trade show in Las Vegas this week. Ambarella’s chips are already used in a lot of high-end drones from companies such as DJI and Yuneec, and the company has also supplied a lot of chips to makers of action cameras, like GoPro, as well as home security cameras.

“We’ve captured high-market share in the drone business, or, as we call them, flying cameras,” said Chris Day, vice president of marketing and business development at Ambarella, in an interview with VentureBeat. “Now we’re moving into our first electronic mirror application.”

The first chip being introduced today is the A9AQ, which can be used in electronic mirrors in cars. The chip is a camera system-on-chip (SoC) that can process 4K images from multiple still cameras or video recording systems. The A9AQ features an 800-megahertz dual-core ARM Cortex-A9 central processing unit (CPU) to handle imaging tasks in modern cars, from advanced driver assistance to user interface and wireless networking. The chip comes with a companion Serdes chip for high-performance video camera applications.

The single chip works with camera side-view and rear-view electronic mirrors, which show you a video of what’s behind your car as you back up. It has multi-exposure high-dynamic range (HDR) processing to provide visibility in low-light and high-contrast scenes. That means you may be able to see even if someone is shining LED headlights in your mirror. The mirrors are increasingly common in cars that assist drivers with tasks such as parking.

“It can take multiple video inputs to provide the output you need,” Day said. 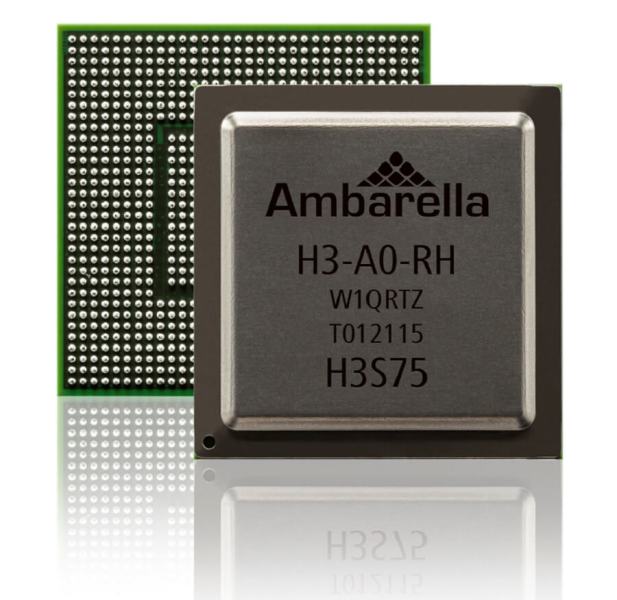 Above: Ambarella’s H3 is an 8K system-on-a-chip.

Ambarella also showed its 8K UltraHD chip for virtual reality and drone cameras. The Ambarella H3 SoC delivers 8K UltraHD at 30 frames per second and 4K UltraHD at 120 frames per second. That’s going to lead to drones and VR equipment that will be able to take phenomenal-quality pictures and videos. For VR, the chips could be the heart of 360-degree VR cameras. And 8K videos played on 8K displays will eventually provide us with remarkably good video experiences, as pixels at this resolution are indistinguishable to the human eye.

“With the introduction of H3 we believe we provide the highest video performance and best image quality solution for high-end drones and multi-sensor video cameras,” said Fermi Wang, president and CEO of Ambarella, in a statement. “H3 delivers 8Kp30 video performance to match the next generation of displays, such as 8K televisions and high-resolution head-mounted displays.” 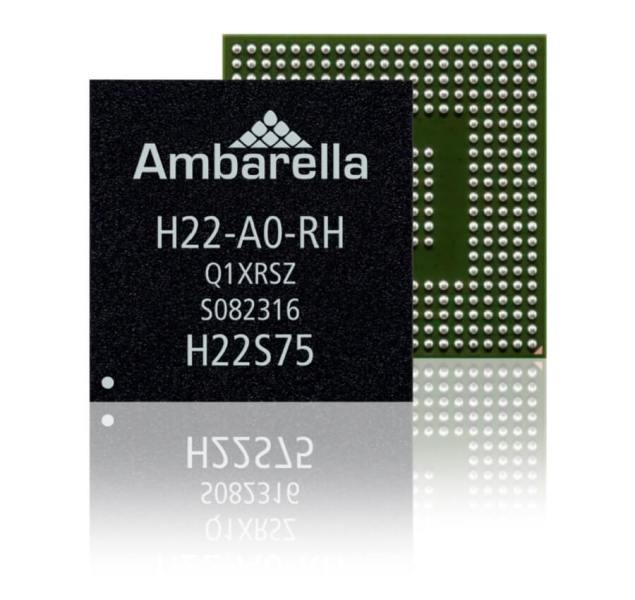 Above: Ambarella’s H22 is for 4K drones and sports cameras.

Since the chip is made in a 14-nanometer process technology, it has very low power consumption, enabling 4K cameras with small sizes and extended battery life.

The device’s 4K EIS can augment or potentially eliminate the need for a mechanical gimbal in a drone. The ability to encode at high frame rates, including 4Kp60 and 1080p120, delivers smooth slow motion, high-definition video, even during fast action shots.

Day said the products in the space are advancing remarkably fast. Snapchat introduced its augmented-reality glasses, dubbed Snapchat Spectacles, which use Ambarella’s imaging chips. Ambarella’s chips are also used in dashboard cameras that are used to record video and provide proof of what really happened in case of a crash. The company has 660 employees.