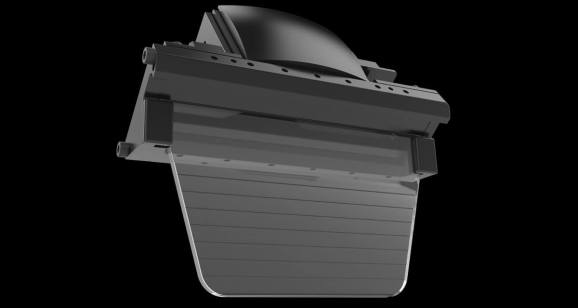 This Lumus prototype has a 55-degree wide field of view.

Lumus, an Israeli startup that just raised a $45 million funding round, is unveiling new augmented reality displays for smartglasses that offer a wider field of view.

The company showed the Maximus prototype for AR glasses with a 55-degree field of view at CES 2017, the big tech trade show in Las Vegas this week.

Rehovot, Israel-based Lumus makes the optical engine that empowers AR solutions. AR is expected to become a $90 billion market by 2020, according to tech advisor Digi-Capital. Market researcher IDC predicts that 30 percent of Global 2000 companies will begin incorporating AR and virtual reality (VR) into their marketing programs in 2017.

Founded in 2000, Lumus is on a mission to create optics that transform the way people interact with their reality. The company is working on optical technology for see-through wearable displays and serves multiple AR vertical markets, including health care, manufacturing logistics, avionics, and, more recently, consumer products. The Lumus solution is based on its patented Light-guide Optical Element (LOE) waveguide, which combines the smallest dimension eyewear for any given field of view.

Lumus technology enables the production of wearable eyeglass displays that are compact, comfortable, and fashionable. The Lumus near-to-eye transparent display technology consists of a unique lens that contains an array of ultra-thin transparent reflectors — the patented Light-Guide Optical Element — and a mini-projector that injects an image into the lens, also patented. These two elements are combined to create a wide field of view, true color, daylight brightness, and a see-through display.

The Maximus prototype features a top-down design, allowing users to wear their own prescription glasses. Lumus also showed its Sleek prototype, which focuses more on style, compactness, and mobility.

“Lumus is determined to deliver on the promise of the consumer AR market by offering a range of optical displays to several key segments,” Lumus CEO Ben Weinberger said in a statement. “From our unique vantage point as the key enabler of augmented reality eyewear, we foresee the consumer AR market arriving sooner than expected, with some of our customers planning to introduce consumer prototypes during the coming year.”

Lumus has targeted its products at health care, military aviation, and logistics, among others. The company has 70 employees.