In 2006, the average early-stage seed round for a startup was just under $600,000. A decade later, this has peaked at $2.2 million. In the era of mega-rounds, mega-valuations, over-funding, and mega-burn it is becoming increasingly common for startups to raise not one, but multiple seed rounds. What is driving this trend? Are startups really better off raising multiple seed rounds, and what does this mean for seed funding in 2017?

By definition, seed rounds exist for investors to be the first and earliest-stage investors (and by default take the most risk) in a startup. However, despite seed funding having dropped by 4 percent year-over-year in 2016, the ticket value of a seed round has also increased by 3x in the last decade. In 2006, a seed startup could expect to raise $700,000 tops. Today, the average ticket-size for a seed round is $2.2 million — or $2.81 million if you’re lucky enough to be located in the Bay Area.

Increasingly, this has meant early-stage VCs have had to dish out the cash for startups that have a Series A valuation but with pre-revenue risk. To counteract this hefty bias, Micro-VC funds have been gaining traction, offering pre-seed capital ranging from $150,000 to $500,000. In 2015 alone, 106 of these new ‘pre-seeders’ popped up in the US, giving early-stage startups an even greater pool of capital to pick from and eliminating the “awkwardness” that comes with raising rounds under $500,000. 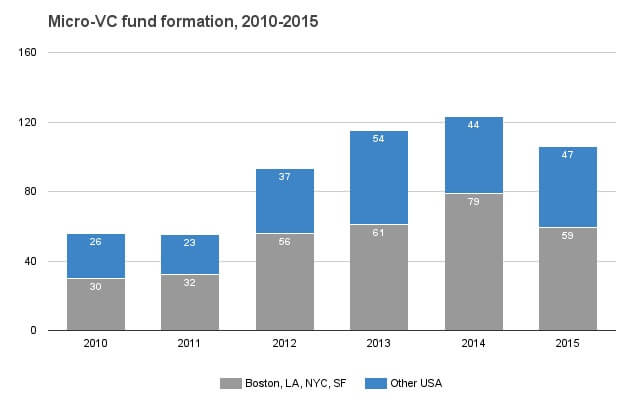 We heard it enough times from founders we know and trust that it’s really awkward in this market to raise $500,000 as a seed round.

The evolution of seed capital

Before we examine seed funding trends, let’s first break down why the seed funding landscape has evolved so drastically, and why startups now feel the need to raise multiple seed rounds.

1. The early-stage funding cycle shifted. Pre-2005, as a startup, you could expect to bankroll your idea through family and friends and then tap into two major sources of capital: business angels and VCs. Basically, you could get a potentially great idea financed quite early on, before you even had any market traction or product fit. Seed was the lead-up to generating traction, and then you would score a Series A to fuel a product-market fit, then go for a Series B or C to fuel your growth. The second Internet bubble, disruptive business models, and growth of institutional funds changed all that. Suddenly startups were growing faster, becoming more capital efficient, and experiencing better unit economics, and institutional funds were becoming bigger. As Rob Go from NextView explains, this considerably altered the funding cycle. Seed investors were looking for more traction, and Series A rounds got larger. As a result, startups have to tap into multiple sources of funding to even qualify for what VCs look for in early-stage seed or Series A. 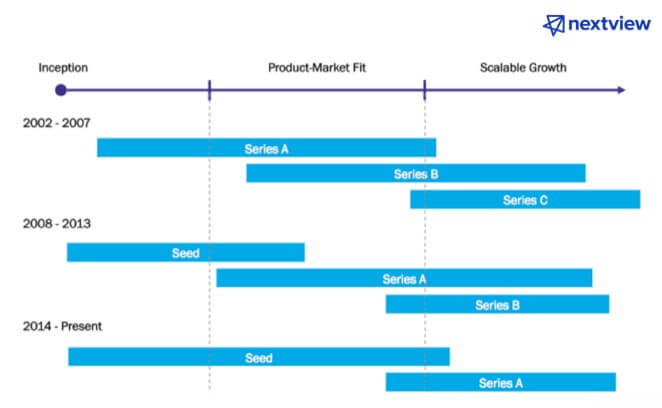 Above: The evolution of early-stage funding rounds

2. The market for seed got saturated. Circa 2005,entrepreneurship became hip. Pure economics (affected by a number of market, financial, and policy conditions we are all familiar with) increased the demand for seed capital and startup supply. In 2005, Y Combinator launched, followed closely by TechStars. In 2008, there were 16 startup accelerators — in 2015 this peaked at 170 — growing by an average of 50 percent year-over-year. This isn’t even counting the number of entrepreneurship programs, startup grants, and funds competing to finance seed startups. The result? More than 5,000 early-stage investments accumulating to $19.5 billion in funding. With such a window of opportunity, startups had access to a pool of seed funding from multiple types of investors — each with different criteria and investment goals — which drove up the value of follow-on funding. Today, it is not uncommon for startups to go through numerous pre-seed and seed funding rounds from multiple investors before hitting up a VC; more often than not, it is expected. Which brings us to the next point. 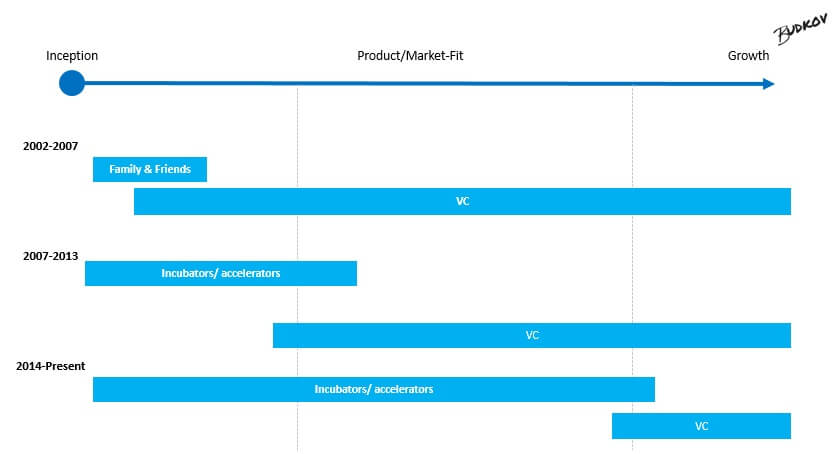 Above: The evolution of early-stage investors

3. Seed is no longer seed. You’re no longer first raising seed capital, you’re raising pre-seed. And that’s not even the first round. You’ll probably have raised from family and friends first, then perhaps hit up a business angel, then entered an accelerator program — and perhaps a second one, because why not — then some individual investors or business angels. At that point, you’ll qualify for a seed round. This isn’t even including the myriad of syndicates and crowdfunding options. By this point, you may still be pre-revenue, but your numbers add up, you’re hitting your growth milestones and have gained enough traction to whet the appetite of investors. The problem? The ease of raising seed capital will make it much more difficult to raise Series A and B since these rounds have gotten inflated.

4. Series A and B are inflated. No startup decides to raise a seed round and stop there. The goal is always to raise more through Series A and B. But with seed rounds now the size of traditional Series A or B, they are much more difficult to raise — even if you hit all the metrics. In parallel, the median dollar value of a Series A or B has inflated to such a point that most startups don’t qualify. In a recent post, Tomasz Tonguz highlights that Series A and B deals fell by 20 percent in 2016, but the investment size of a Series B grew to $10-15 million. Notably, a Series A deal size now averages $3-6.6 million. In this current market, it may be the Series A round that is in the most danger.

To examine this trend, I used Mattermark data from all disclosed seed rounds that occurred in the Bay Area in 2016. This included both first-time and follow-on seed funding. To ensure that data wasn’t skewed, I set a minimum investment limit of $100,000 up and a maximum of $3 million (the median for a Series A).

The results show that while Bay Area startups are outperforming their global counterparts in the ticket-size of their first seed round, raising multiple seed rounds comes at a cost, with down-rounds becoming the rule not the exception.

1. The average value of total seed funding has hit $2.81 million. This accounts for all seed funding rounds, with the median being $2.3 million. Now, we can argue that the Bay Area is a bubble unto itself, however this clearly aligns to the global average of $2.2 million. With the value of seed funding having increased so drastically (3x in 10 years), it is clear why seed deal flow has dropped in 2016, out-valuing many early-stage investors. This is why we’re seeing the emergence of so many Micro-VC funds to make up for this gap. 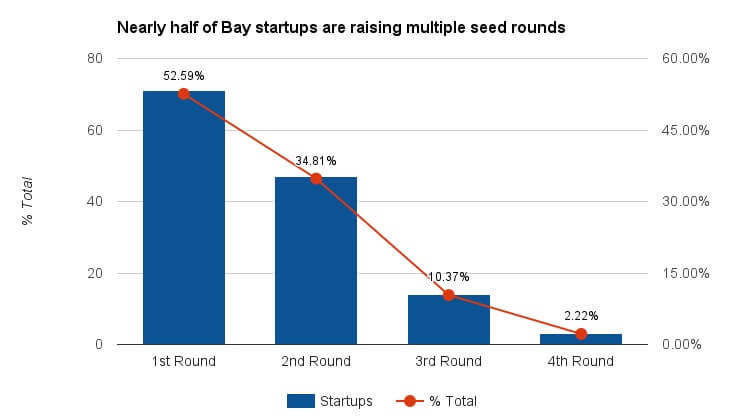 3. Startups founded after 2014 are most likely to have raised multiple seed rounds. This is where it starts to get interesting. You would think that older startups would be the most likely to raise follow-on capital, right? It seems not. Fifty percent of startups that were on their second round of seed were founded in 2014 or later. The kicker? Fifty-two percent of early-stage startups on their third seed round were also founded in 2014 or later. This means the time frame between each seed round is getting shorter and shorter, and startups are either growing faster or losing their capital efficiency (I’m leaning towards a mix of both). 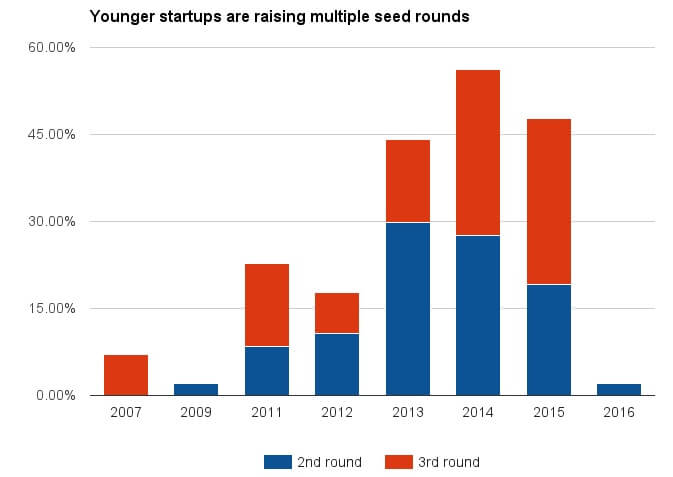 Startups founded in the last two years aren’t only raising more rounds, they’re raising much larger dollar amounts. When I analyzed the value of the last disclosed funding, I found that just under 70 percent of startups that raised $2 million or more were less than two years old. 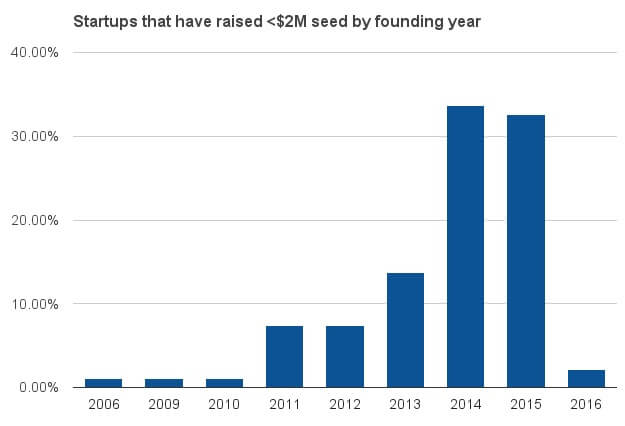 4. Raising multiple seed rounds comes at a cost. As Bay Area startups multiply the amount of seed rounds they raise, they also increase their likelihood of raising a down-round. While the average deal size for a first seed round is $1.89 million — and peaks in the second seed round at $1.93 million — by the third round, startups are losing about 8 percent in deal size on average. That’s equivalent to over $170,000, which makes it all the more difficult to graduate to raising a Series A. 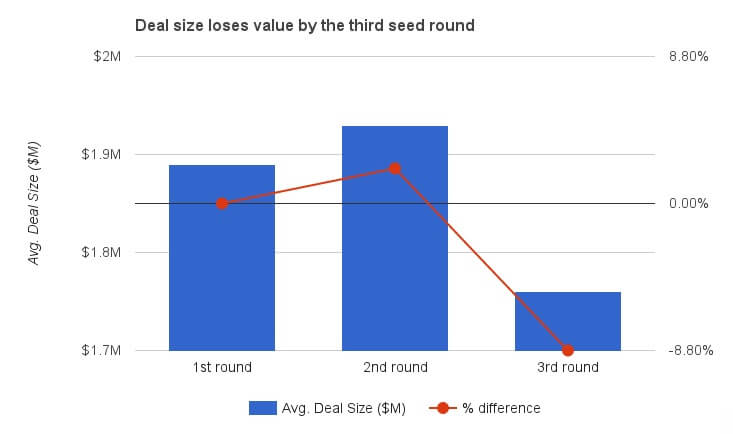 The funding situation in the Bay Area may not reflect the rest of the country, but it does tell us quite a bit about how seed and Series A are going to evolve in 2017. This trend of multiplying seed rounds is going to continue, especially with the growth of Micro-VC firms, which in turn will make it much more difficult for startups to raise Series A and B rounds, primarily due to much lower valuations and the growth in median deal size. As a result, we will see a distinct segmentation in early-stage investors, with a growing gap between pre-seed and seed funding.

Put simply, startups in 2017 may find it awkward to raise anything between $750,000 and $1.5 million, finding that their capital requirements are either too high or too low as early-stage investors agglomerate at each extreme.

Tatjana de Kerros-Budkov is an entrepreneurship strategist, startup mentor, and author of ‘The Startup Illusion’. Follow her on Twitter @entrprnrialist.