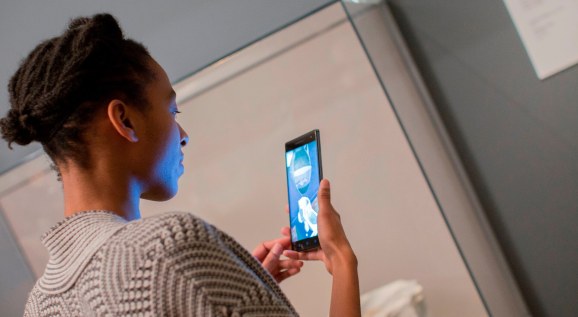 Tango in use @ DIA

Google has announced that it’s opening up its Tango augmented reality (AR) platform to museums today, kicking off with the Detroit Institute of Arts (DIA).

Google’s Tango platform uses computer vision to make mobile devices location-aware, relative to their surroundings — without relying on external systems, such as GPS, Wi-Fi, or sensors. This is useful for indoor navigation and 3D mapping and opens up a world of opportunities for commercial use cases. Just last week, BMW announced it was using Tango to help sell cars remotely. There aren’t many devices on the market that support Google Tango, however. Google’s Lenovo Phab 2 Pro and the Asus ZenFone A do, but the latter was just announced at CES last week and won’t be available until later this year.

For this latest initiative, the DIA has teamed up with GuidiGo, a publishing platform specifically for creating guided tours on mobile devices — and a company that has embraced Tango in the past. In February of last year, GuidiGo demoed one of the first Project Tango apps capable of 3D indoor geolocation, at the Museu Nacional d’Art de Catalunya in Barcelona.

In terms of how the Detroit Institute of Arts will harness the AR powers of Tango, well, visitors will be able to borrow a Lenovo Phab 2 Pro from the front desk, and then they can explore exhibits such as ancient Egyptian mummies, using an AR overlay to garner an X-ray view of the inside of the sarcophagi.

Elsewhere at the DIA, various pit stops will serve up puzzles, games, and quizzes that patrons can interact with through their Lenovo phablet.

Google says it’s working with other museums globally on similar AR-infused exhibits, but it hasn’t shared any specifics yet.