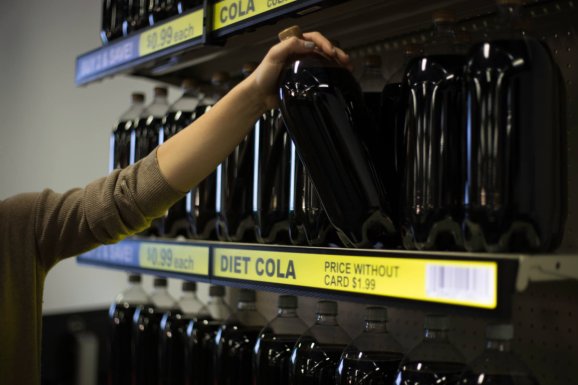 That area on store shelves typically reserved for price tags and logos may soon be occupied by sensors with the ability to track people and their emotional response to products. Announced today by Cloverleaf, shelfPoint is an LCD display with eye-level sensors that recognize joy, sadness, happiness, or disgust in a shopper’s face.

Dell and other early partners will begin to use shelfPoint by mid-2017, said CEO Gordon Davidson, and the device will be available to other retailers later this year.

In addition to tracking emotional reactions, shelfPoint registers the age, gender, and ethnicity of shoppers and records the amount of time a person spends lingering in front of a display ad. And sensors don’t just record metrics. They also respond in real time. Ads can change if sensors detect that a shopper is displeased by what they see.

Studies with Proctor & Gamble and other partners found that impulse buys and purchases were nearly 40 percent higher with shelfPoint than with the average store shelf or cardboard promotional material.

The shelfPoint sensor is placed in high traffic areas to boost the sale of high-margin items or impulse purchases, Davidson told VentureBeat in a phone interview.

“As people are walking by, we want to attract their attention, cause them to turn their head,” Davidson said. “Then what we do is we change the content and have more of a conversion story.” He said the focus is on “presenting the promotion and causing consumers to throw another item into the basket and drive impulse sales.”

ShelfPoint made its debut today at the National Retail Federation conference taking place this week in New York.

The tech that determines an emotional response comes from Affectiva. Starting with video and branching into virtual reality and other mediums, Affectiva has developed a way to track a person’s emotion in real time.

Insights gathered from the anonymized aggregate data are used to serve up results and advice to store owners and brands.

ShelfPoint also tracks in-store traffic and can be used for A:B testing of marketing or products.

“Frankly, given the velocity you have in these high-traffic stores, you can get answers to these questions literally in a matter of a couple of days,” a Cloverleaf spokesperson told VentureBeat.

The display also records facial characteristics to recognize if a person returns to the shelf within 24 hours.

Despite this ability, Davidson said shelfPoint doesn’t use facial recognition.

“Facial recognition would suggest that we know who is there, and we’re looking at them. What we do is face detection, and so we do not retain or capture any personally identifiable information,” he said. “We don’t record video or capture pictures. What we’re looking at is spots on the face, and then we translate that into metadata that says here’s the makeup of the individual that’s in front of it. We’d never be able to identify you.”