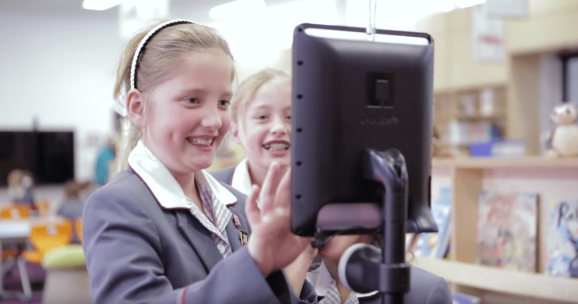 Double Robotics says there’s a big audience for its telepresence robots and thinks it has the numbers to prove it. In the past four years, the company said, more than 8,000 of its robots were sold worldwide, generating more than $20 million in sales revenue. With this traction, Double Robotics has plans to raise a series A round of funding this year along with introducing a software subscription plan to help customers get more out of their robots.

“We’ve learned a lot over the last few years to see what it takes to work in office cultures,” remarked company CEO David Cann in an interview with VentureBeat. “When we started, we didn’t know what to expect. We had a crazy concept of putting robots in the office, and no one had done it to the scale that we’ve had.”

Double Robotics is the developer of a telepresence robot that allows users to remotely navigate around the office and engage with colleagues instead of being stationary at a desk or requiring the use of Skype, Google Hangouts, or other web conferencing software. Its main interface is the iPad positioned at its head, so think of this as a very mobile version of FaceTime.

Today, 70 percent of Double Robotics’ customers are in the enterprise space, with 40 of the Fortune 100 companies using its telepresence robot. The remainder is in education and health care. It’s not surprising to see the workplace dominate as the number one sector for these devices, but there are others for which Double Robotics hoped use cases would surface, but never did. Cann cites the elderly care market as one: “We don’t see a huge market there for at least the next couple of years. We didn’t know what to expect, but we’ve learned a lot over the last few years.”

Double Robotics continues to operate as a profitable company and believes it has a leg up on its competitors, which include Suitable Technologies, Anybots, MantaroBot, and Kubi. Cann expressed pride in his company’s $20 million sales revenue figure, saying that it was all done with no marketing dollars. But based on its growth, Double Robotics will reinvest money into its product, which it has done previously by releasing a faster telepresence robot with an attachable camera and other accessories.

Looking deeper at the 8,000 robots sold worldwide, we’re told that many customers only purchase one or two. However, with the changing work landscape, more orders for telepresence robots could be rolling in. Cann said that Double Robotics’ largest customer has 88 robots on-site, and this appeal in the workplace is spurred from a bottom-up decision where workers see the potential and push their bosses to requisition a robot to give them flexibility in where they work from.

In the immediate future, Cann said, his firm will pursue a new round of funding after raising $2 million in 2012 from SK Ventures, Grishin Robotics, Y Combinator, and angel investors. He declined to share how much he’s pursuing, but said that the company will “expand really wide and do marketing to grow the team, while reinvesting in the company and in the future.” On the product side, this quarter, the company will introduce a $99 per unit monthly subscription model that lets IT departments maintain the robots through a fleet management software offering.

Cann recommends other hardware startups think about scalability right from the beginning because it will ensure that their business will stay around for the long term. He offered three strategies that helped Double Robotics get to where it is: Properly estimate the bill of materials so you know how to price your product and ship it; focus on having everything done in-house so you’ll be able to better manage cash flow; and design your product to be extensible, meaning that everything is backwards compatible so customers can maximize their enjoyment of the device.