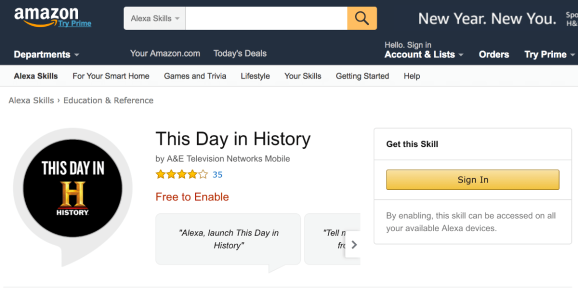 On this day in 1919, diplomats met to negotiate the end of World War I. In 1950, it’s the day China and the Soviet Union officially recognized the Republic of Vietnam, and in 1991, former Washington D.C. mayor Marion Barry was found doing crack in a hotel room.

The This Day in History Alexa skill has broken into the Top Enabled and Customer Favorite categories of the Alexa Skills Marketplace. It’s one of the first new skills to enter the Top Enabled category since Alexa sold millions of smart speakers over the holiday season. Other skills found among the most-used by owners of Alexa-enabled devices remain the same.

By saying “Alexa, launch This Day in History,” you can hear facts about history today and on any other day of the year. Each skill can be expanded, and when expanded creates an Alexa card with a summary that appears to come from history.com, which lists dozens of historical events every day.

Also among Top Enabled Alexa skills are Short Bedtime Story; Inspire Me, for inspirational quotes; and skills for ambient sounds like thunderstorms and rain. These actions have maintained their popularity after being ranked among the most popular Alexa skills in 2016.