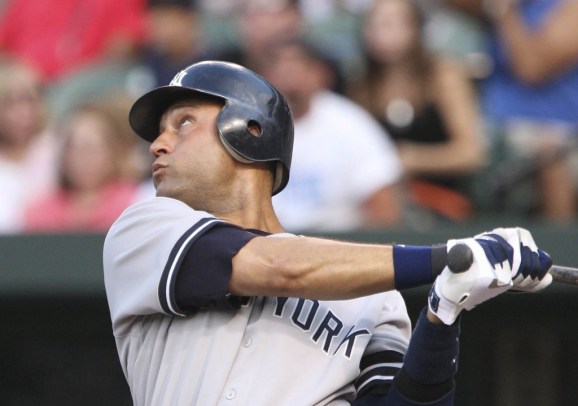 Derek Jeter of the New York Yankees bats against the Baltimore Orioles on Thursday June 28, 2007

The former New York Yankees shortstop co-founded The Players’ Tribune, a site featuring content created by athletes, in 2014. Now, the company is announcing it has raised $40 million in a new round, bringing its total funding to $58 million.

Silicon Valley-based IVP led the round. Previous lead investor NEA also provided additional funding, as did first-time investors like GV, the venture capital arm of Alphabet, and “dozens of athletes,” according to the New York-based company. (While they won’t disclose those new names, former NBA player Kobe Bryant was an early investor.)

“We’re basically a pretty small company,” Jeter told Fortune earlier this week. “But we’ve been able to establish our brand and grow, and this gives us a chance to help us scale further.”

The Players’ Tribune began with just a few dozen contributors writing about their experiences in the sports world. But over the last couple of years, it has managed to hit a few impressive metrics. For starters, it now has more than 1,200 athletes generating content for the site, including NASCAR driver Danica Patrick, Carolina Panthers quarterback Cam Newton and the Golden State Warriors’ Kevin Durant. What’s more, the site’s monthly average “content views” has hit 100 million, and users are spending an average of about five minutes on each page.

Those numbers aren’t bad for a new content site—or even a well-established one. But along the way, The Players’ Tribune has also gone through some growing pains. In late 2015, the site crashed after investor and basketball star Bryant posted a poem announcing his departure from the game. The good news? It was because of a sudden spike in the website’s traffic.

Indeed, the startup’s ability to amass its clicks and engagement levels starts with its ability to attract an all-star roster of athletes, many of whom have used the platform to announce news or write personal essays. (The company says it does not pay any of its athlete contributors, and its president and other co-founder, Jaymee Messler, says the amount of content created by athletes versus The Players’ Tribune’s own editorial team varies, depending on the individual contributor.)

But much of The Players’ Tribune’s success also rests with its ability to sign on brand partners. Most of its revenue comes from native and branded content, with sponsors like New Balance attaching their name to written pieces (and the merchandise featured in them) on the site.

Jeter, Messler, and their investors say that video presents the next big opportunity for the company—and to that end, they plan to use some of their new funds to beef up their production capabilities.

“They’re not building this business on the backs of banner ads,” says Eric Liaw, a general partner with IVP and new member of the board of The Players’ Tribune. “They are thinking much more broadly than the CPM-based model.” (The “CPM model” charges advertisers per ad viewed.)

Jon Sakoda, a general partner with NEA and another member of the company’s board, says that the sports business is ripe for disruption, and that The Players’ Tribune is uniquely positioned to provide an alternative to traditional sports content due to its direct contributions from athletes.

That said, Sakoda is well aware that they are still a small player. For all of the disruption it is causing, The Players’ Tribune will likely remain in the shadow of the industry’s 800-pound gorilla for the foreseeable future.

“It’s going to be a long time before people look at our site and at ESPN and think, ‘Oh, it’s the same,'” says Sakoda.