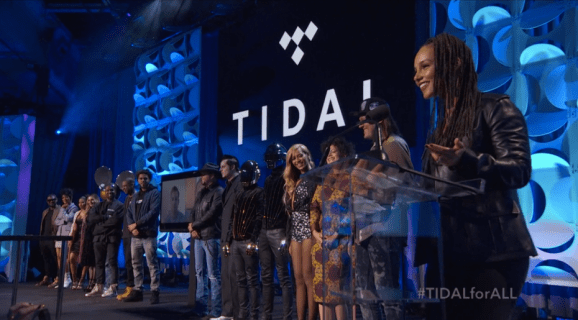 Sprint has acquired a 33 percent stake in Jay Z’s music-streaming platform Tidal, with the telecommunications giant set to offer Tidal as a bundled service to its 45 million customers.

The news comes almost two years to the day after Jay Z — under his real name Shawn Carter — announced he was buying Swedish company Aspiro AB, the firm that owned Tidal, as well as Norway-based WiMP Music.

Jay Z has used his many connections in the music industry to create a celebrity-endorsed Spotify alternative that offers lossless-quality streaming, but it hasn’t really captured the public’s imagination. It has enjoyed spikes in popularity, however, thanks to exclusive tie-ups with big-name artists such as Kanye West. But with rumors abounding that Tidal was in trouble and was reportedly inflating its subscriber numbers fraudulently, a partial acquisition by a major technology company with significant reach makes sense.

“Jay saw not only a business need, but a cultural one, and put his heart and grit into building Tidal into a world-class music streaming platform that is unrivaled in quality and content,” said Sprint CEO Marcelo Claure, in a press release. “The passion and dedication that these artist-owners bring to fans will enable Sprint to offer new and existing customers access to exclusive content and entertainment experiences in a way no other service can.”

Interestingly, Sprint says it will offer “exclusive content” that will only be made available to Sprint customers, which, assuming we’re talking about exclusive songs from big-name artists, will surely rile Tidal subscribers who don’t wish to switch to Sprint.

Another initiative announced as part of the tie-up includes setting up a marketing fund specifically for artists, giving them the “flexibility to create and share their work with and for their fans,” according to a statement. And as part of the deal, Claure will join Tidal’s board of directors.

“Sprint shares our view of revolutionizing the creative industry to allow artists to connect directly with their fans and reach their fullest, shared potential,” said Jay Z. “Marcelo understood our goal right away, and together we are excited to bring Sprint’s 45 million customers an unmatched entertainment experience.”

Terms of the deal were not disclosed, but one unconfirmed report pegs the acquisition value at around $200 million.