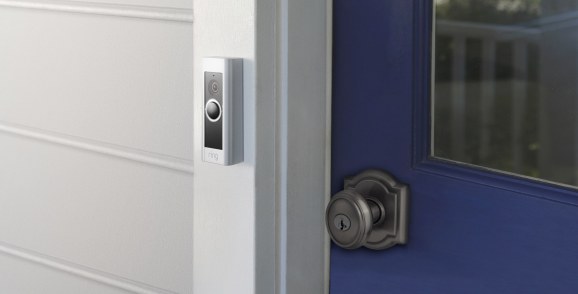 From beds to fridges and beyond, the so-called Internet of Things took a giant leap forward in 2016, with consumers the world over encouraged to connect the most random of household items to the internet.

The new year is setting off on a similar footing, with connected doorbell startup Ring announcing a fresh $109 million investment: a series D round led by DFJ Growth, Goldman Sachs Investment Partners, and Qualcomm Ventures, with participation from entrepreneur Richard Branson, American Family Insurance, Shea Ventures, and True Ventures, among others. The funding round also includes a debt element from Silicon Valley Bank.

We first covered Ring in 2013 when it was known as Doorbot. At the time, the startup essentially offered a doorbell equipped with a Wi-Fi-connected camera, but following a rebrand it has boosted its offering with new products and features including Ring Chime, motion-detection technology, solar panels, standalone security cameras, and a cloud video-storage service.

The premise of Ring’s technology remains the same as it has always been. When someone turns up at your house and rings your doorbell, Ring calls your phone so you can see instantly who’s there — this is useful if you’re in the back garden, in bed, or on the other side of the world. You can talk directly to the visitor through your phone, and see them through the installed camera.

It’s also useful to help thwart the age-old technique used by criminals, who “check” to see if someone’s home by ringing the doorbell. With Ring, there’s always someone in.

The fresh cash injection comes less than ten months after the Santa Monica, California-based company closed another chunky $61.2 million round, which in turn followed shortly after a $28 million round led by Richard Branson. This latest round takes the startup’s total funding to $209 million.

Ring now claims around 1,000 employees in eight countries and, with another $109 million in its coffers, the company says it will continue on its “mission of reducing crime in neighborhoods around the world,” according to a company statement.

Ring says that its products are now on sale in 100 countries, and can be bought in 15,000 retail locations. The company also partnered with the L.A. Police Department last year to install Ring video doorbells in 10 percent of homes in the Wilshire Park neighborhood.

“Ring is one of the fastest growing consumer hardware companies, which in itself is an impressive feat, but we see a much larger opportunity to deliver a full suite of home security products and services,” said Christopher Dawe, co-head of the venture capital and growth equity team at Goldman Sachs Investment Partners. “This is a true market expansion story. Ring is building a next generation home security platform at an accessible price point.”