Unicorns are increasingly starting to look like regular horses, and their magic is fading. Back when there were only a handful of private companies valued at over $1 billion, the term certainly had meaning and value. Today, however, there are some 185 unicorns galloping around, and their numbers may soon be dropping.

Last year saw a dramatic 50 percent drop in financing deals for the 100 or so U.S. venture-backed unicorns — from 62 in 2015 to just 31 in 2016, according to a report from Fenwick & West, a Silicon Valley-based law firm. There were also fewer up-rounds for these single-horned startups, which is not surprising considering the hyper valuations many of them received in 2014 and 2015. 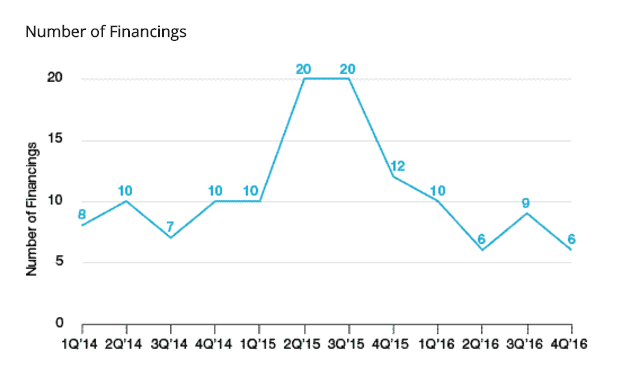 Above: Number of Financings

While the number of deals was cut in half, their average size rose 78 percent —  from $239 million in 2015 to $425 million in 2016, according to the report. This suggests a flight to quality — or, if you like, a culling of the herd — particularly for those that raised money in 2015 and will look for additional funds this year.

“Of the unicorns that raised money in 2015, 12 raised an additional round in 2016 and 4 went public or were acquired. Many of the 2015 funded unicorns that have not raised additional funds or exited will likely need to either raise additional financing (privately or publicly), be acquired, or significantly reduce their burn rate within the next 12-18 months. This could put pressure on the unicorn financing markets and cause valuations to be adversely affected,” the report stated. 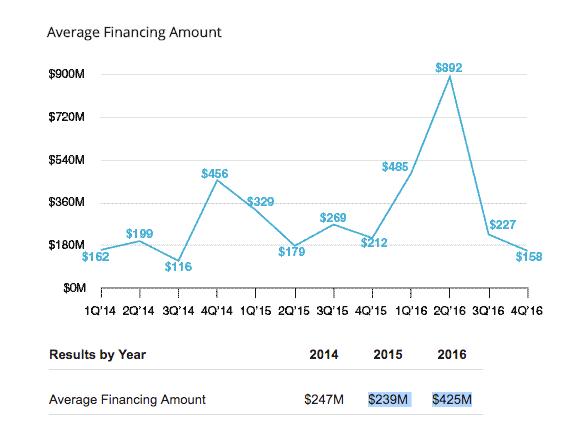 Above: Average financing amount for unicorns in 2016.

And in a sign of further weakness, 40 percent of the unicorns that achieved exits in 2016, either by going public or by being acquired, did so at a lower valuation than their previous financing round, according to the report.