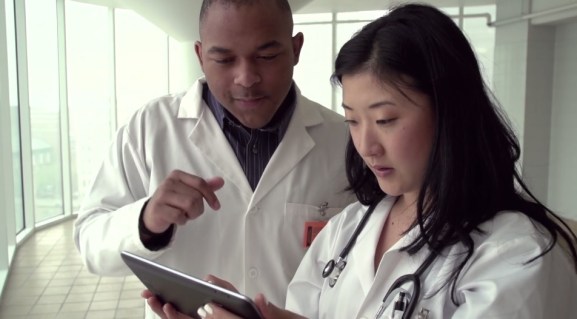 The World Health Organization has estimated that there is a global shortfall of approximately 4.3 million doctors and nurses, with poorer countries disproportionately impacted. In the U.S., these shortages are less acute; instead, the country struggles with ever-increasing health care costs, which often translate into limits on the time a patient is able to spend with a doctor. One study estimated that U.S. doctors spend on average just 13 to 16 minutes with each patient.

So against this backdrop of a global shortage in doctors and nurses, and cost-driven strains in patient care, let’s take a look at some of the ways AI systems are being evaluated for use in medical care.

In August 2016, an artificially intelligent supercomputer did in 10 minutes what would have taken human doctors weeks to achieve. Presented with the genetic data of a 60-year-old Japanese woman suffering from cancer, the system analyzed thousands of gene mutations to determine that she had a rare type of leukemia. Arinobu Tojo, a professor of molecular therapy at a hospital affiliated with the University of Tokyo’s Institute of Medical Science, said, “It might be an exaggeration to say AI saved her life, but it surely gave us the data we needed in an extremely speedy fashion.”

Globally, scientists and doctors are making use of AI systems to tackle a long list of issues. Artificially intelligent computers are being designed to analyze gene mutations, make better use of scientific studies, and enhance doctors’ clinical knowledge beyond their first-hand experience. Machine learning is enabling much of these efforts.

The foundation for the use of artificial intelligence in medical care is machine learning, the process by which computers “study” huge datasets to discover insights. Physicians and machine learning scientists, for instance, supply a smart computer with archived medical photos to train the system to spot certain disease markers or mutations. The more data a machine-learning system has, the more adept it becomes at providing accurate results.

Researchers at Imperial College London are testing machine learning applications in treating traumatic brain injuries. When they fed their algorithm images of such injuries, the system identified brain lesions and learned to discern white and gray matter. That ability could provide researchers with valuable information about these life-altering and often fatal conditions.

In one example of machine learning applications in medicine, scientists experimented with how machine learning might facilitate diagnosis of diabetic retinopathy, a condition that causes vision impairment and blindness. The team trained the system using 128,000 images of healthy eyes. They then had the algorithm analyze 12,000 images and graded its ability to recognize signs of disease. The results indicated that the system “matched or exceeded the performance of experts in identifying the condition and grading its severity.”

Machine learning could be a game-changer in medicine because, unlike humans, computers don’t get tired and do have an infinite capacity for learning and memorization. Instead, AI is being designed to enhance diagnoses by providing doctors with data-driven insights derived from patients’ histories and conditions. Physicians can then use those reports to create treatment plans based on previously unavailable information. These systems can also provide vital insights in geographic areas where doctors, particularly specialists, are few and far between. Which, as the World Health Organization data reflects, is practically everywhere.

AI in the exam room

AI’s impact may also be felt in people’s day-to-day health management and routine doctor’s visits. Most of us have typed a list of symptoms into a web search at one point or another, and sorted through conflicting or alarming diagnostic information. Search companies are beginning to attach their platforms to AI systems with the goal of providing health information that is personally relevant.

Of course, search engines are not replacements for real doctors. But it’s arguably better to see results vetted by experts from Harvard Medical School and the Mayo Clinic than to scour questionable community forums that offer little in the way of knowledge or reassurance.

A study by the American Medical Association followed a group of 57 physicians through 430 hours of patient care. Here’s what it found, according to the Forbes article:

Physicians spent 27% of their time in their offices seeing patients and 49.2% of their time doing paperwork, which includes using the electric health record (EHR) system. Even when the doctors were in the examination room with patients, they were spending only 52.9% of the time talking to or examining the patients and 37.0% doing […] paperwork.

For all of the potentially groundbreaking research we’ve described here, the true test of AI’s impact in medical care might be whether it can make a dent in the paperwork problem.

AI-driven efforts are already underway to combat the administrative burden. Some health companies are using apps to cut down on the time nurses and doctors spend gathering patient information. Outsourcing triage and patient interviews to algorithms could cut down on health care costs, but it carries the risk of further reducing the time doctors spend with their patients. The goal would be to improve doctor-patient interactions by freeing physicians from laptop screens to focus on the people in front of them.

And that’s really where the true potential of AI in medicine lies. Rather than replace interpersonal connections and involvement, AI can reduce the burden on doctors and nurses so they can focus on the uniquely human elements of patient care. No one will complain if AI helps lower health insurance premiums or helps physicians find the right treatments faster. But people look to doctors and nurses for reassurance, comfort, and insight. Machines simply cannot replicate a human’s bedside manner.