This Saturday marks a new era in Facebook’s life, as it officially becomes a teenager. Thirteen years ago, the company was founded as a social network, and it has since evolved into a technology giant that’s now used by more than 1.86 billion monthly active users. To celebrate another annual “Friends Day,” Facebook has brought back its personalized videos to celebrate you and your friends.

And if that’s not enough, special GIFs have been added to Facebook Messenger for the occasion.

“Facebook stands for connecting people and creating a global community,” company chief executive Mark Zuckerberg said this week during Facebook’s fourth quarter earnings call. At its core, the social network has been about bringing people closer together — and the world is definitely a smaller place now.

And just like last year, this week users will begin seeing Friends Day videos, which are a compilation of connections and memories. You could equate this to the existing friend-versary videos that periodically pop up in your News Feed, but this time it’s not about a single person, but rather encompasses the dozens, hundreds, or even thousands of people you interact with on the social network. 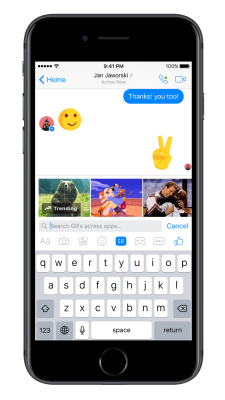 Your video will initially be set for your eyes only, but you can edit it and share it with friends if you choose. To avoid previous issues with bad memories or insensitive moments, Friends Day videos can be modified, including reordering friends shown.

But if you want to express your appreciation to friends individually, Facebook Messenger has special Friends Day GIFs that can be inserted into any conversation. This is just the latest creative element to be added to the popular chat app since the launch of the Messenger platform in 2015. While these GIFs are meant to mark Friends Day, there’s no information as to whether or when they will disappear.

Both the video and GIFs are rolling out today.