The market is flooded with products tailored to the needs of men: viagra, penis enlargement pills, fitness apps, and more. But a new sector dedicated to women is emerging. Femtech, or female technology, is tickling the curiosity of hungry venture capitalists who are beginning to sniff an opportunity like bloodhounds. Those who think of femtech as a niche market should look at the data: It concerns 49.5 percent of the world’s population.

One of the first femtech startups to emerge was Glow, a period- and ovulation-tracking app founded in 2013. Contrary to what you may think, the startup was launched by a man — PayPal cofounder Max Levchin, who is now the executive chairman. On the other side of the Atlantic, Berlin-based Clue — another period tracking app — was also founded in 2013. Ida Tin, Clue founder and CEO, is recognized for coining the term “femtech” to describe this sector.

On the maternity front, Naya created a lightweight and noiseless smart breast pump by using water instead of air. But women aren’t solely defined by babies and breasts. Addressing intimacy and sexual wellness is a startup named L., which has developed a line of ethical care products, from organic tampons to condoms free of chemicals.

CB Insights provides a comprehensive chart of some notable femtech startups around the world: 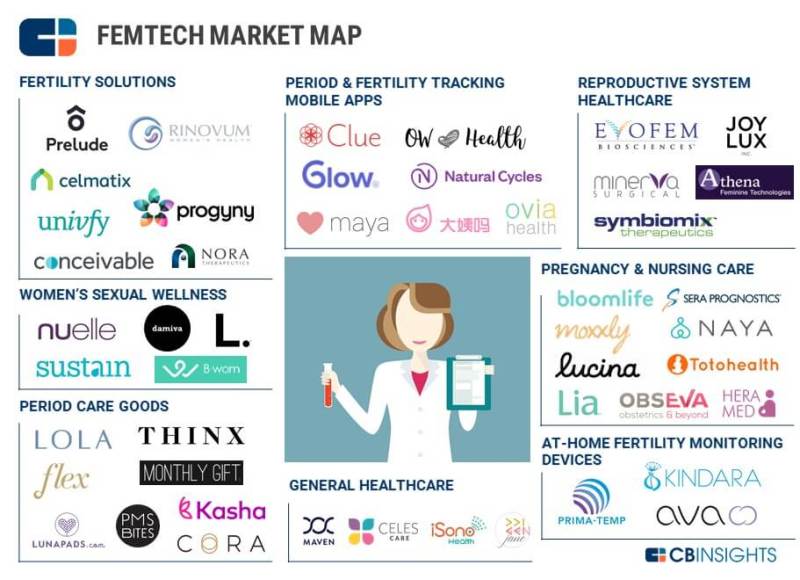 Above: The Femtech Market Map

It’s surprising that the tech world has taken so long to tap into this market. NGOs have been tirelessly fighting for decades to provide health care to women in developing countries around the world, so why has Silicon Valley waited so long to disrupt and digitalize this sector? For starters, the Valley is dominated by men, and pitching a period-tracking app to a testosterone-filled room can be intimidating.

But some female founders have chosen to turn this “uncomfortable talk” into a business opportunity. This is the strategy used by Lauren Schulte, founder and CEO of The Flex Company. She crafted a concrete business plan to pitch her product: a menstrual disc that replaces tampons. By sharing her personal story and providing supporting data, Schulte made sure the VCs knew there is an entire market out there waiting and willing to spend.

Today, Flex’s annual revenue run rate is in the multi-millions of dollars, according to Schulte. “There were times when investors weren’t receptive to my pitch because of my product,” she said. “But if you’re a great business and you’ve got traction, investors are going to invest in you, regardless of your product.”

While this is true for some VCs, others aren’t comfortable investing in products that don’t directly involve them. This is why the lack of female VCs is a problem, and some female founders are voicing their concerns: 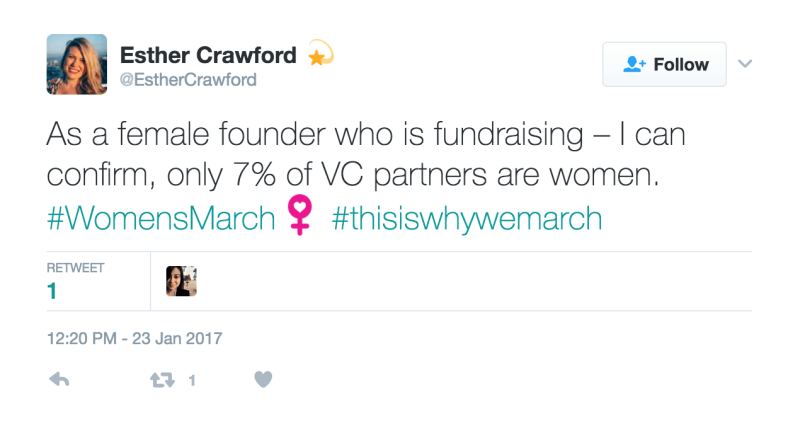 But after the Ellen Pao trial of 2015 and the mounting pressure Silicon Valley is facing in terms of diversity and inclusion, this may soon change.

Female VCs are scarce, but there is considerable funding floating around for femtech startups. CB Insights estimates that about 45 femtech startups have raised over $1.1 billion in funding since 2014.

Noteworthy deals include Progyny, a Kleiner Perkins Caufield & Byers-backed fertility platform that has raised a total of $87.8 million, and Glow, which raised $28 million from Founders Fund and Andreessen Horowitz, among others.

Another Sand Hill Road powerhouse that invested in femtech is New Enterprise Associates (NEA), which has three notable investments in this sector: sexual wellness startup Nuelle; Minerva Surgical, which has developed a treatment for heavy menstrual bleeding; and ObsEva, a Swiss reproductive therapeutics startup that just raised $96.8 million in its initial public offering (IPO).

On the East Coast, Union Square Ventures (USV) is also tapping into femtech, something managing partner Fred Wilson recently shared on his A VC blog. His colleague Albert Wenger, who led USV’s investment in Clue, told VentureBeat in an email that “Femtech will be an innovation and investment opportunity for many years to come.”

“I’m looking forward to seeing new companies disrupting the female reproductive and overall femtech space, as it is still wide open for the taking,” she told VentureBeat in an interview. She also mentioned that after seeing more than a handful of tampon companies, it was refreshing when Lauren Schulte brought her Flex, a technology disrupting the billion-dollar tampon space with a new menstrual device. “You can pee with it, have sex with it, and leave it in for up to 12 hours,” she said. “It’s a game changer!”

Other than VC money, femtech startups have also caught the eye of Y Combinator (YC). The Silicon Valley-based accelerator program has backed several women’s health startups, including iSono Health, L., Flex, and Nurx. Kat Manalac, a partner at YC, was initially skeptical. “I was afraid that VCs wouldn’t be interested in them at Demo Day,” she told VentureBeat in an interview. However, both Flex and Nurx were among the most successful fundraisers of their batch, she said.

Femtech is on the rise, but how will the Trump administration impact women’s health? Whatever the outcome, the industry is concerned. Startups, VCs, press, activists, and nonprofits are coming together to try and figure out what to do next.

Flex and Glow hosted a dinner in Washington D.C. the night before the Women’s March to discuss this issue. Attendees included femtech startups like Celmatix, Cora, and Clue, as well as female-oriented nonprofits such as Camions of Care and Support the Girls. Activists, lobbyists, lawyers, and authors focused on female health also joined the discussion. Clue recapped the dinner in a recent blogpost: “We spoke about what we can do to keep women’s issues top of mind in government, society, and healthcare.” 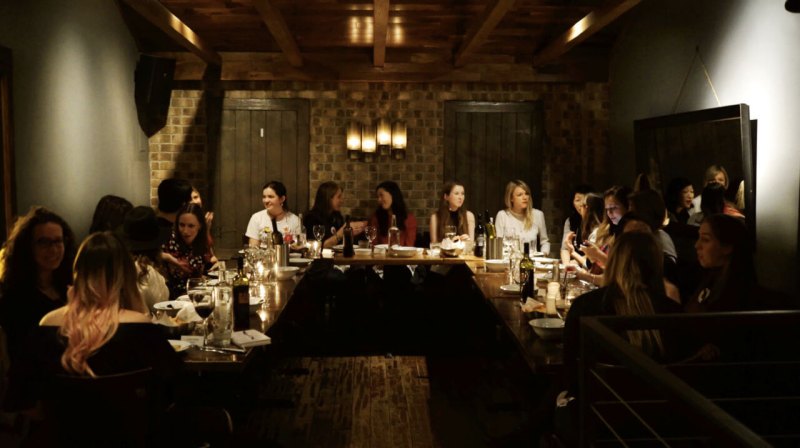 Above: Femtech dinner in Washington D.C.

Schulte, one of the cohosts, added in an email to VentureBeat that the femtech sector is particularly concerned about women’s access to affordable health care. She argued that while President Trump has never held public office before, there is a rich history of information about Vice President Mike Pence. “Pence has a track record of voting against affordable access to women’s healthcare that we find alarming,” Schulte wrote.

“For starters, he authored the first bill to block federal funding to Planned Parenthood and consistently does whatever he can to shut them down. We’ve already seen the negative impacts such measures can have on low-income women when they do not have affordable access to health care, including the HIV outbreak in Indiana in a town where Planned Parenthood was shut down.”

With the Affordable Care Act (ACA) on the verge of being repealed and Planned Parenthood fighting for federal funding, there may not be a viable solution for low-income women. This is where femtech leaders can make a difference.

According to the National Women’s Law Center, roughly 55 million women covered by the ACA receive contraception and other preventive services with no out-of-pocket costs. The Trump era may therefore push femtech startups to develop newer, more innovative technologies, like breast cancer screening apps and digital contraceptives.

Startups like Natural Cycles are already ahead of the game, as they have carried out several clinical trials to get their fertility-tracking app certified as a contraceptive. The Stockholm startup bases its research on women’s body temperatures — when the data is fed into the app, a proprietary algorithm tells the users if it’s safe to have sexual relations (green light) or if there is a risk of getting pregnant (red light).

Ava, a Swiss-based startup, is also working on turning its fertility-tracking bracelet into a non-invasive wearable contraceptive. “We believe the core of the femtech growth lies in scientific discoveries in women’s health research,” said Lea Von Bidder, president and founder of Ava’s U.S. branch, in an email to VentureBeat. “Ava is such a discovery, and we will keep investing heavily in additional clinical research to make new, better solutions available for the women.”

As femtech startups, fueled by new VC money, rocket to the center of socio-political discussions, the tech industry’s role in women’s health may be more important now than ever.