If you’ve decided, like the majority of app developers, to make your app free, you’ve likely considered a number of alternative monetization options — one of which is to offer in-app purchases, such as subscriptions or extras, like in-game currency, a full game unlock, or bonus content.

But focusing solely on in-app purchases (IAP) is a huge mistake. There is another monetization opportunity that not only unlocks new revenue streams, it can even increase your existing IAP revenue by about 40 percent and pump up user retention at the same time.

Rewarded video is a way for publishers to present ads in a rewarded or “value exchange” format, where the user opts in to watch an advertisement — ideally a short, 15-second video or interactive rich media ad — in exchange for unlocking access to premium content within the app. 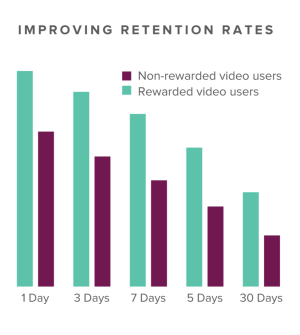 This is if they are using apps that contain a paywall, or gated content or in-app currency such as points, goods, or coins. The user can choose to watch the targeted ad to earn access to this premium content or virtual reward in lieu of in-app payment. So, it works well for game developers with virtual currencies, or a media company with a paywall gate that can be unlocked.

The best part about rewarded video is that it is entirely based on user opt-in, so the result is a non-intrusive, native mobile ad experience where the user is very much in control. Moreover, this experience encourages app users to continue interacting with the app, garnering a higher retention rate for that publisher.

One of the biggest challenges that app publishers are facing today is the deepening retention problem. Fewer than 1 in 4 mobile app users return to an app after they first use it, and the drop-off rate at 5, 10, and 30 days later is even worse. While we’ve seen some of the highest retention rates in the industry on our global ad platform, there are still categories like Social Networking and Gaming that suffer from low retention rates. 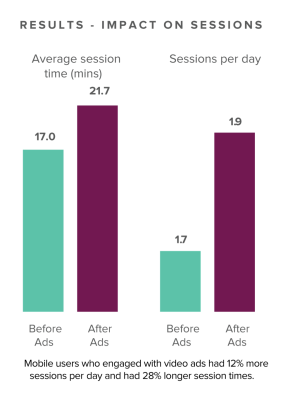 Many publishers’ first reaction to the idea of rewarded video is: “Will I lose users?” And the answer is a resounding “no.”

On top of this, the users who interacted with rewarded video ads made their first IAP 10 percent sooner, and also made IAPs more frequently, with a more than 70 percent increase in frequency at both 15 and 30 days into their mobile app download.

Rewarded video is no longer an experimental tactic, and it is certainly not just for mobile gaming companies. Spotify, for instance, has what it calls Sponsored Session, where users can watch a brand video in the app in exchange for 30 minutes of free music play. With brands like Ford, McDonald’s, Coca-Cola, Target, Wells Fargo, and NBC Universal Pictures all participating, there’s no doubt that the inventory is high value for advertisers, and demand will surely grow.

Now it’s time for every non-gaming company to consider if rewarded video makes sense as a monetization tactic for their mobile app. And, as you do so, think about your user’s mobile experience: When they go to read that news story and find it behind a paywall, do you think they’d rather pay three or four dollars for a week of access — or even just $0.99 for, say 48 hours — or do you think they would watch a short video ad in order to immediately read that one article?

You already know the answer to this: 90 percent of people just want instant gratification. They want the one article, the free swipe, the extra level of a game. Go out and monetize that 90 percent instead of leaving money on the table.