Microsoft added a new feature to Cortana today: reminders for promises you’ve made. Microsoft’s smart digital assistant already gives you reminders for people, places, and times, but this goes even further by analyzing what you said you would do in your email. The suggested reminders are available in the U.S. on Windows 10, though support is coming to Android and iOS “in the coming weeks.”

Microsoft has been testing and adding various types of reminders to Cortana for a while now. This reminder was first added to Windows Insider builds in January 2016, meaning the feature took just over a year to be deemed ready for all Windows 10 users.

To use the feature, you must be signed in to Cortana, have given communications consent, and add your Outlook.com, Office 365 work, or Office 365 school account to the connected services section in your Cortana notebook. Then just email yourself a commitment like “I will send you the report by Friday” and Cortana will give you a suggested reminder. 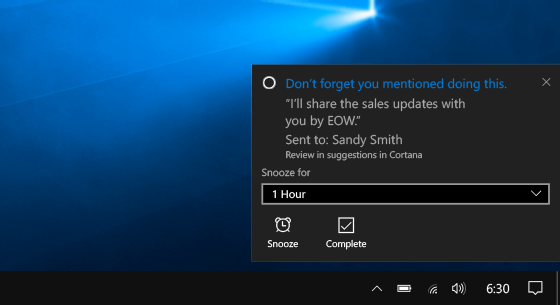 The feature leverages machine learning technology developed in partnership with Microsoft Research (MSR). Cortana is thus able to automatically recognize, presumably using natural language processing (NLP), when you make a commitment in email messages and proactively suggest a reminder at just the right time. You’ll get a pop-up message so when you pledge to get something “done by EOD” you won’t forget.

Since the feature first arrived in the Windows Insider program, Microsoft has made some improvements. It’s now possible to link to the email that the reminder is coming from and get notifications ahead of a deadline. Microsoft also says Cortana’s suggestions are even more accurate thanks to changes to the models for identifying the commitments you’ve made.

The big limitation here is that this feature is arbitrarily curtailed to the U.S., even though Cortana is available in 12 other markets. Additionally, this won’t work for non-Microsoft email accounts, though the company promises that support for other email services is “coming soon.”