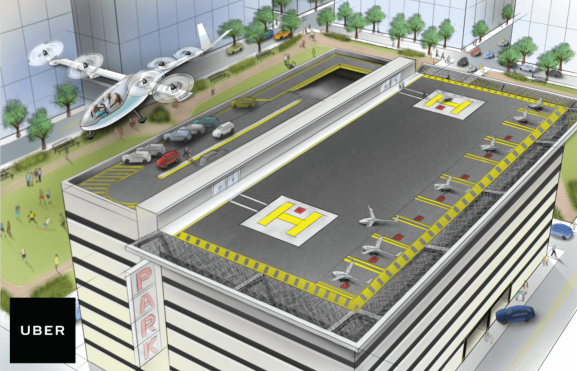 In 2016, Uber unveiled Uber Elevate, an ambitious program to get cars -- or at least Ubers -- off the road and into the sky.

Few things have come to symbolize our collective hopes for the future quite like the somewhat outlandish concept of flying cars.

Long portrayed in films and futuristic television shows as the height of consumer technology, the flying car has so far eluded even our most brilliant minds — but perhaps not for much longer.

Following the publication of a white paper on the subject of virtual takeoff and landing (VOTL) aircraft, Uber has hit the ground — er, sky? — running with what it now refers to as Elevate, a program whose mission is to explore the feasibility of consumer-level flying aircraft. The implications are enormous, even if the roadmap to such a breakthrough is far from certain.

One of Uber Elevate’s first major victories was landing some big-name talent, namely Mark Moore, an ex-NASA engineer who worked on advanced aircraft for the purposes of exploring outer space. Moore himself is well-decorated and published, having released a paper of his own back in 2010 about how realistic it would be to deploy helicopter-like VTOL vehicles on a large scale.

The two are a natural fit, both having been interested in the possibility of this type of vehicle for several years. The ultimate goal is to make this futuristic concept into something practical: a wide rollout of low-flying vehicles that could potentially solve a host of modern headaches, including traffic congestion, global warming, and the crumbling American roads, bridges, and other key parts of our infrastructure.

The Sisyphean task of maintaining our roads — not to mention paying for them — could become much less of a burden in the coming years if we no longer have to accommodate wheeled vehicles.

We’re getting ahead of ourselves, though. Naturally, even the concept of flying taxis raises more than a few questions about how these vehicles could possibly work in practice, and about what kind of impact they’d have on our already fragile natural environment.

The future of vehicle ownership

Uber is clear about its mission for Elevate: It wants to create what it calls “on-demand aviation,” which is the general direction the automotive industry as a whole appears to be heading in. The sharing economy has already begun to fundamentally change what vehicle ownership even means, particularly in areas of the country where populations are dense and vehicles can be shared easily.

The idea is a simple one: When ride-sharing finally comes of age, far fewer people throughout the country will need to own cars. The ones who do will be able to monetize them, either by driving themselves or by taking advantage of self-driving technology, which will be here on a large scale much sooner than you might think.

As things stand now, Uber is a leader in the ride-sharing community and gets a 28 percent cut of drivers’ profits by acting as the go-between. Elon Musk shares a similar vision, though without as much of the human element: He’s calling for roving fleets of driverless vehicles that can be called upon for a ride at a moment’s notice.

Self-piloting aircraft, like the ones described by Uber in its white paper, would certainly seem to be the most likely marriage of these two concepts — as well as the most likely endgame for the future of vehicle ownership. So aside from realizing a very old sci-fi dream, what are the practical benefits?

While it’s clearly far too early to start taking preorders for our own VTOL aircraft, it’s not too early to start thinking about the implications of such a breakthrough. This is especially true of the impact it’s going to have on our collective consumption of nonrenewable resources, such as fossil fuels.

The goal so far appears to center on battery-powered aircraft, eschewing completely the sort of environmentally unfriendly liquid fuels aircraft have been relying on for generations. Since we’re already living in a world where the effects of man-made climate change manifest on an almost daily basis, this alone is reason enough to celebrate a new avenue of technological inquiry.

As far as performance goes, these things shouldn’t be thought of like planes. Indeed, early versions will bear a closer resemblance to Smart cars than to private jets: small, brutally efficient machines capable of limited distances, at least at first. A single battery charge is expected to provide a travel distance of between 50 and 100 miles.

Naturally, we live in a competition-driven society, and that means Uber is far from alone when it comes to pursuing the dream of flying taxis. Joining Uber Elevate is a host of other technology-driven companies that are hoping to stake claims of their own. Google cofounder Larry Page is a big player, having thrown his weight behind not one but two startups focused on VTOL aircraft. Airbus is also tossing its hat into the ring with a project dubbed Vahana.

The pieces all seem to be coming together for a high-flying future in which fewer people own vehicles and the planet doesn’t have to pay nearly as high a price for our wanderlust or our daily commutes. It’s an exciting time to be alive, and with so many technology companies training their eyes on the future, this hallmark of human achievement may be upon us sooner than anybody thought possible.