Facebook counts more than 65 million businesses using its Pages product and boasts that it’s cheaper and more sociable than maintaining a website. For the most part, the arrangement offers companies all they need, including ways to market and interact with their customers. But what about when it comes time to grow and bring on more employees? Facebook didn’t really offer a human resources component, but the social networking company has now built one just for Pages.

Rolling out over the next few weeks, the feature lets companies tap Page admins in the U.S. and Canada to post jobs right on Facebook so they can receive applications through Facebook Messenger. With this move the company has taken a swipe at LinkedIn, which has long held job opportunities in its domain, though the target audience could be vastly different.

Job posting isn’t exactly new to Facebook either, as it was introduced last fall as part of a test. Facebook declined to state exactly how well it performed, but the fact that it’s now being widely released suggests it at least met expectations. “Today we’re taking the work out of hiring by enabling job applications [directly] on Facebook. It’s early days but we’re excited to see how people use this simple tool to get the job they want and for businesses to get the help they need,” said Andrew Bosworth, the company’s vice president of business and platform, in a statement provide to VentureBeat.

Whenever a business has a position open, it can use Facebook to post the notice. Page admins will create a job post using the Page composer and include details like the title, whether it’s full- or part-time, salary or hourly wage, and more. After publishing, it will appear as a standard post within the Page feed and also in a special “jobs” section. For anyone who has “liked” or followed the Page, job listings will appear in the general Facebook News Feed. Postings will expire within 30 days.

If you’re interested in working at a company and find a listing that suits you, just tap the Apply Now button and submit an application. Facebook will populate the document with your name, job history, and other information pulled from your public profile, which can be edited before submitting. This could also be a play encouraging users to provide the social media company with more information about themselves in order to not only improve ad targeting, but to make other products more useful.

Applications are submitted through Facebook Messenger, leveraging the platform that was first introduced in 2015. From there, communication can take place through the chat app or be taken to email. Interestingly, while the former may appear unconventional at first glance, engaging applicants using messaging tools is increasingly common — if you can talk to businesses using Facebook Messenger, why not do the same with applicants? 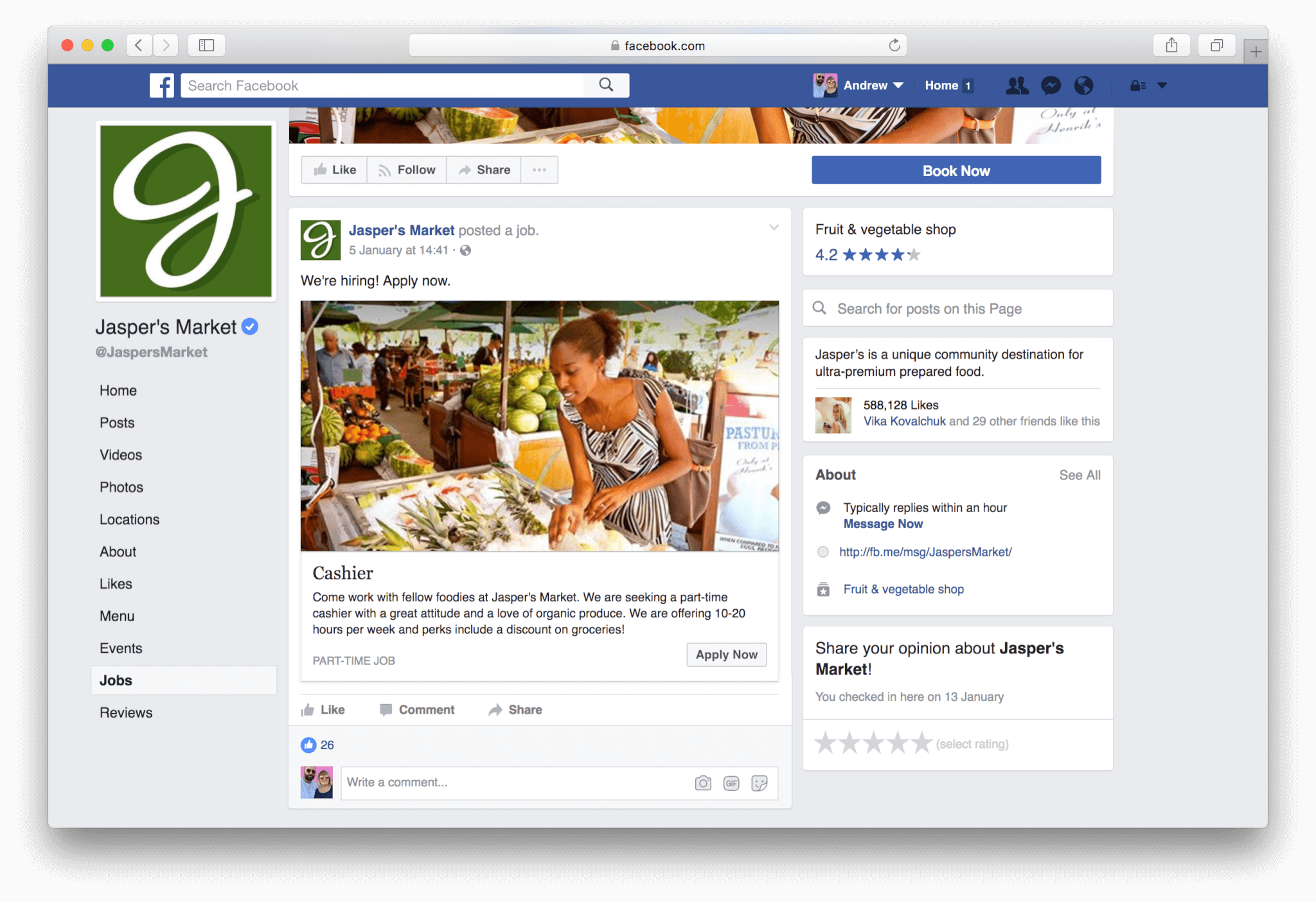 Many Pages are used by small businesses, so there’s a likelihood of job openings being around part-time work or employment where you’re not necessarily working in an office. That could be Facebook’s distinguishing feature in relation to LinkedIn. But if corporations and larger businesses wish to use Facebook, they’ll need to adapt to the new workflow because, as of right now, there’s no way to integrate with applicant tracking systems like Workday, Taleo, or LinkedIn. Nevertheless, Facebook probably believes its scale can help improve businesses’ reach because, after all, it has more than 1.86 billion monthly active users.

These roles are also going to be very targeted, because the candidate pool is people who have already expressed an interest in the business by liking the Page. And this works well for companies with multiple locations, such as coffee shops. For example, Philz Coffee has several locations in downtown San Francisco, but I always stop by the one near VentureBeat’s office. I might be inclined to like that specific location’s Facebook Page, and if I happen to find myself looking for new opportunities and recognize Philz Coffee as having a good culture and work environment, I might apply because I’m already a fan.

Facebook may suggest that this move is a natural extension of people already using the social network to connect and find jobs, but it could also be a path to additional revenue for the platform since businesses will be able to leverage Facebook’s advertising tool to market open positions, targeting them to specific demographics.

Job listings on Pages are rolling out now to admins and job seekers in the U.S. and Canada, but there are plans to expand to other countries. The feature is supported on both mobile and the web.