The semiconductor industry’s executives believe that growth will slow down to a trickle in 2017 and further slow through 2020, according to a survey of executives by accounting firm KPMG.

About 57 percent of executives believe the industry will show positive growth, with most predicting 1 percent to 5 percent growth. That’s not so far from the forecast by the chip trade statistics group, World Semiconductor Trade Statistics, which predicts revenue growth of 3 percent in 2017 and 2 percent in 2018. Such rates are close to global gross domestic product growth, a sign that the industry is mature, in contrast to most other categories of the tech industry. This slowdown in growth coincides with a belief that Moore’s Law is slowing down (as you can see in the graph a couple of slides down).

Concern over stagnating growth and weakening average selling prices was catalyst for massive merger and acquisition activity in the semiconductor business over the past two years. For the U.S., the outlook was positive in that the country is viewed as the best territory for revenue and head-count ground. 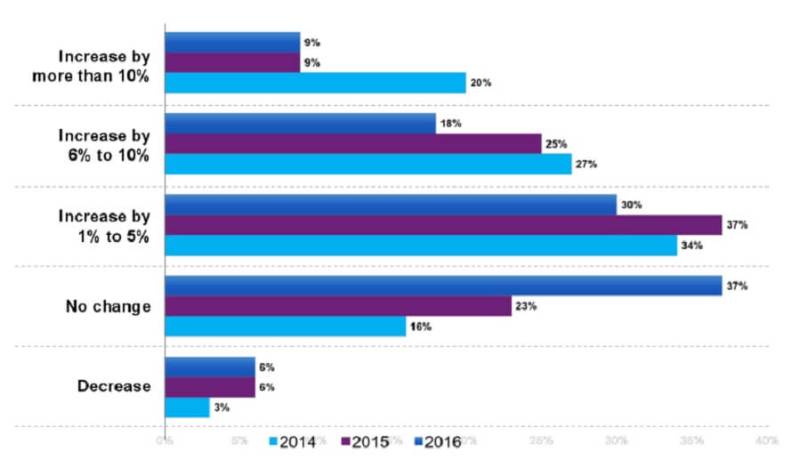 Above: Chip industry expectations for the next year. Most expect growth in revenues of 1 percent to 5 percent.

Semiconductor executives face a tough choice. Revenue growth is moderating — but will the leaders expand into new businesses, through organic growth or acquisition? They can move into new areas of fresh demand, such as chips for self-driving cars, data management, security, and the Internet of Things. The chip makers can focus on what they are good at, risking putting all their eggs in one basket, or they can diversify.

R&D is useful for getting into new businesses. But if M&A becomes an increasingly popular tool of choice for doing R&D, that suggests it would make sense to spend less on organic R&D. And if you lower the level of investment too much, a company could miss an entire technology cycle.

On the topic of workforce, it is noteworthy that while the percentage of respondents expecting “no change” went up compared to last year, the percentage expecting a decrease in their company’s head count went up significantly from 5 percent in last year’s report to 14 percent this year. This represents the largest uptick in the “decrease” response across all survey questions and is a result of both the lower revenue projections and the need to realize post-merger synergies.

Forty-five percent of industry leaders still project some degree of increase in capital spending next year, which is encouraging.

However, similar to what you’ll see in other investment areas, an increasing amount expect capital spending to be the same. Considering the unprecedented levels of M&A activity in the last couple of years, and the increasing cost of debt, it is understandable that many respondents are thinking about working capital restrictions. 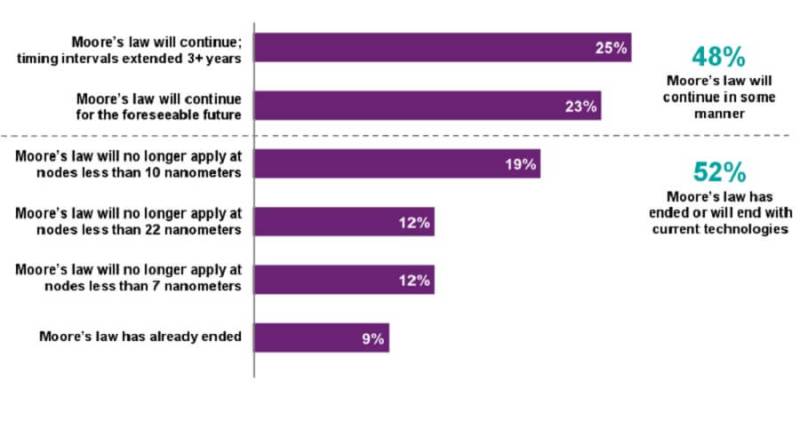 Above: Views on whether Moore’s Law will keep going or end.

In this year’s survey, the three-year outlooks have shifted to almost match the one-year outlooks. This further conveys the realization by the surveyed executives that the industry is maturing and transitioning into the late expansion or contraction stage.

About 54 percent of respondents expect their company to have positive revenue growth in three years, where 57 percent expect positive revenue growth next year. And 52 percent of respondents expect the global semiconductor industry to have increased operating profitability in three years, compared to 51 percent that expect this next year.

Importantly, even though midterm growth and profitability confidence are decreasing, companies need to be careful not to pull back too much on new product development capabilities. This is the engine of future growth and should not be jeopardized in favor of short-term financial gains, KPMG said. If anything, these muted three-year outlooks reinforce the need to become more efficient with R&D spending through disciplined portfolio management. 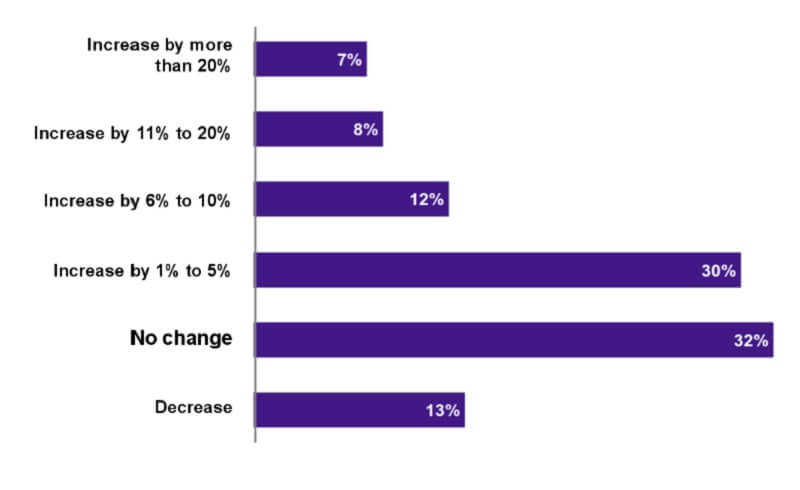 Above: What is your prediction for the rate of change in the aggregate valuation of semiconductor M&A deals in 2017 compared to 2016?

KPMG calculates the Semiconductor Industry Confidence Index based on answers to the one-year outlook questions on revenue growth, operating profitability, R&D spending, workforce growth, and capital spending. An index score above 50 represents an optimistic outlook and a score below 50 signals a pessimistic outlook.

The index score for the next year is 41. This is a little surprising and can be partially explained by the timing of the survey, which was in September 2016, before the industry started its fourth quarter rally.

The score of 41 is driven mainly by the shift to “no change” responses across all of the above referenced questions. Confidence is understandably muted when industry insiders predict low single-digit revenue growth, slowing operating profitability, and lower investment levels.

The bright side is that as the industry matures and evolves, it also has a path to recapture growth through a combination of diversification and efficient portfolio management. Nearly half of the executives surveyed see diversification into a new business area as their No. 1 strategic priority over the next three years. M&A tied for the No. 2 spot with talent development and management. Frankly, M&A is one mechanism frequently used to diversify.

Price erosion is solidly rated as the top overall issue facing the industry during the next three years and has had a meteoric rise since the 2014 survey. The impact, though, varies at the company level. Companies with ultimate end customers in the consumer market, where there are pricing battles on smartphones, tablets, PCs, and other electronics, see constant price pressure.

The executives believe the rise of indigenous Chinese chip companies will lead to more intense competition in the coming years. But industry executives view the U.S. as the most important geographic area for revenue growth in 2017 and through 2017.