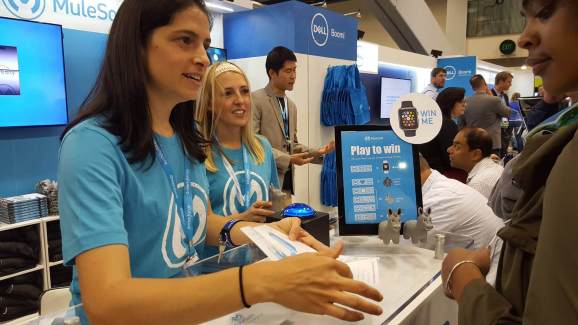 A MuleSoft booth at a 2016 conference.

The company has been in a position to go public for years and most recently raised money in 2015.

Most of MuleSoft’s revenue comes from subscriptions and support; the rest comes from professional services, consulting, and training. In 2016 MuleSoft came up with a $49.5 million loss on $187.7 million in revenue, according to the filing. The annual loss narrowed from $65.4 million in the prior year. Revenue rose 70 percent from $110.3 million, and 38 percent of it came from outside the U.S.

Founded in 2006, MuleSoft had 1,071 customers at the end of December, according to the filing. Customers include BMW, eBay, Target, and Verizon. At the end of 2016 the San Francisco-based company had 841 employees, with 177 working on research and development.

The filing comes two weeks after Snap, the company behind Snapchat, filed to go public. That IPO will likely be considerably larger than MuleSoft’s.