I had to get out and look for them.

On the 2017 Ford F-350 Super Duty truck I’m testing this week, there are 7 cameras. One is on the front grill, right next to the Ford logo, and another one is near the windshield close to the rearview mirror. There are two more close to the side mirrors (which have built-in flashlights). There’s one that points toward the truck bed. If you’re counting, that’s 5 so far. On the handle to the rear tailgate, there’s one that points down toward whatever you’re towing. And finally, there’s a portable camera you can connect to your trailer and point behind you.

That gives you a workout finding them. In the cab, you can use the touchscreen to check all of these camera views (see images). It helps tremendously with parking, checking for road impediments at low speeds, backing up to a trailer, and verifying things around the truck before you pull away from the curb.

Ford has done an outstanding job in two areas. One, the tech is easy to use. You don’t have to hunt around for the camera button — it’s right above the touchscreen. The company redesigned the interface a year or so ago so that it works more like an iPad.

Second, Ford knows what people want in a truck and how they use them. Once you’re inside the cab and ready to go, it’s annoying to have to get out and check the curb, then check your trailer, then check the truck bed to see if anything is going to go flying out on the highway. A system called the Smart Trailer Tow Module even alerts you about trailer connection problems.

More than anything, this points to a more connected future for driving any vehicle. The cameras are there as a convenience, but eventually cameras will be able to do much more than that. They already can scan for people and deer in the road and read speed limit signs. Eventually, they will scan for other problems, like ice on the road (preparing the tires accordingly), a curve that requires more of a slowdown than we think (based on the telematics form other cars, especially the ones that have taken the corner too fast and crashed), read directional signs to know when we haven’t followed the navigation based on environment variables instead of just GPS, and much more — scanning around the car at all times, in a 360-degree arc.

For now, I’m happy with what Ford is doing — it’s annoying to hook up a snowmobile trailer and then have to jump out again and look at the curb as you back out or try to judge the distance to a closed garage door. The three-panel forward view, which uses the side cameras and the front camera, gives you a good idea of what’s ahead of you around the front of the truck. (Believe me, seeing impediments like a cement brick or a few tools on the ground with your naked eye is hard in a massive truck.) In the Ford F-150, there’s a towing feature that lets you back up using a dial that adjusts the steering automatically, but I prefer going hands-on-the-wheel and using the cameras. The F-350 does use a steering assistance motor (it’s called Adaptive Steering) that makes it easier and faster to turn the wheel in a parking lot at low speeds.

All in all, the cameras and other adaptive features make the F-350 one of the most advanced trucks I’ve tested. Hopefully the camera tech catches on with other automakers. 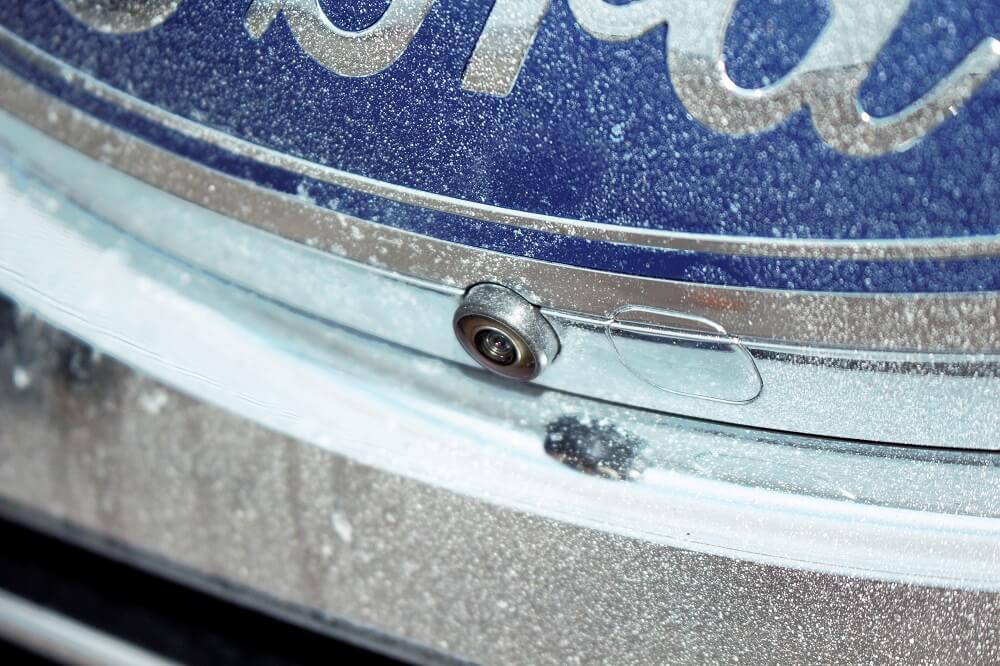 Above: The camera in the front grill gives you a good look at the front of the truck. Credit: Seth Lemmon 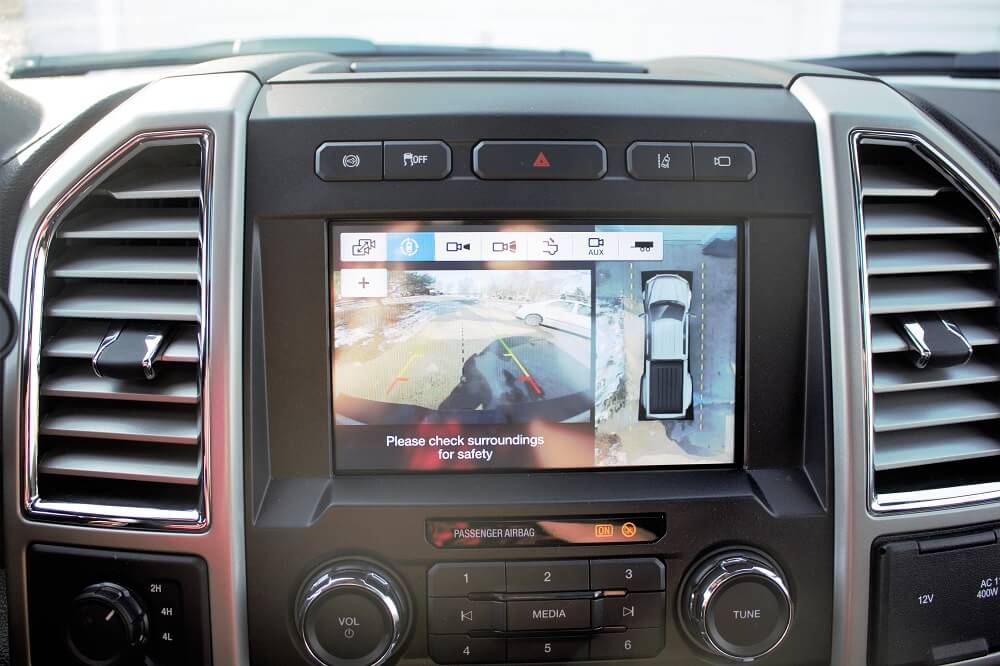 Above: The bird’s-eye view helps you see all around the truck. Credit: Seth Lemmon