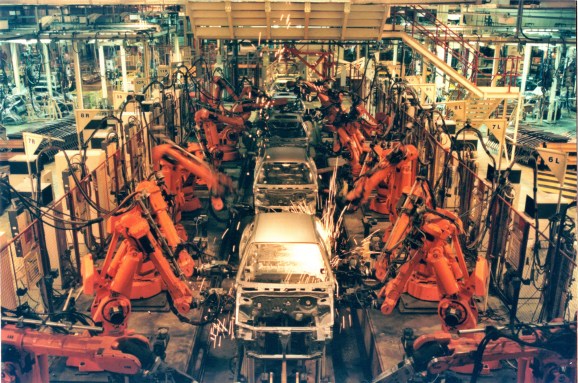 Those jobs aren’t coming back, and why would we want them to? There are so many better jobs going begging…

Mr. President, we followed your campaign closely (who didn’t?), especially the part about bringing jobs back. We know by this you mostly implied assembly line factory workers — traditional rust belt manufacturing.

But those jobs have shriveled away.

The U.S. has lost five million manufacturing jobs since 2000. You like to blame China, Mexico, and other countries. But if you look at the facts, China isn’t taking manufacturing jobs, robots are. Nearly 90 percent of the output of these vanished jobs remained in the U.S. and was replaced by robots. Assembly line jobs disappearing should not be seen as a problem, but as a sign of progress (although it’s very tough for those who lost their jobs). Before electricity, we had lamplighters to light and maintain street lights; before alarm clocks, “knocker-uppers” would go to the home of their clients and knock on the door. Today, we want to bring back assembly line jobs that robots now perform?

Look more closely, please. Notice that these robots run on software. So ask yourself who is taking care of them? That’s right, software engineers.

Tech jobs don’t just exist at tech companies like IBM, HP, or Cisco. Software is everywhere, in all industries: retail, transportation, finance, healthcare, and manufacturing! Trying to bring the jobs of the past back is a lost battle. We should focus on current and future unfilled jobs; there are so many!

The U.S. economy is craving skilled technology workers: There are a quarter-million job openings for software developers in the U.S., half a million unfilled jobs that require tech skills, and the forecast need grows to one million within the next decade. The average U.S. salary for IT jobs is about $79,000 (well above the $50,000 average for all jobs). These are much better jobs than any that our robots are now doing. And workers don’t have to go into a mine, or spend eight hours with mind-numbing, back-breaking repetitive work. Best of all, these jobs are all over the U.S., not just in the Silicon Valley (which accounts for only 10 percent of them).

These roles don’t discriminate by age, sex, religion, location, or social class. But there is one big issue: U.S. workers aren’t qualified to take all of them.

The Obama administration took a shot at trying to balance the difference between employer demand and skilled workers with the TechHire initiative. The goal: to expand tech talent pipelines, especially alternative education organizations that could provide U.S. citizens with IT skills.

The first $100 million pledge was passed by Congress in 2015, followed by a $150 million funding in 2016. Coding bootcamps (the technical high schools of this decade) were among the beneficiaries. They are training the next generation of blue-collar workers: junior developers who are taking jobs that require little expertise in tech, and there are plenty of those.

But our economy is rapidly digitizing, and so should our workforce. Leading companies in all industries are being disrupted by newcomers who are rethinking their businesses by leveraging software. Uber is not a “tech” company; it’s a transportation company. Amazon isn’t a tech company either; it’s a retail company. These next-generation companies need top talent to succeed, not just people with the training they might get from bootcamps. And yesterday’s industry leaders in automotive, retail, and manufacturing now have to compete for digital talent with the Ubers, Amazons, Googles, and Facebooks of today.

Bootcamps aren’t enough, and centuries-old college methods are expensive, slow, and inefficient. Companies that need highly skilled software engineers are starting to understand that the lack of talent will not be solved anytime soon. If we want to reduce our dependence on skilled immigrants, then we’ll have to find a way to fill this gap within our own borders or risk losing the companies who need these workers. For example, Google saw no choice but to try to solve this education puzzle itself. The company is busy developing programs, tools, and resources to train highly skilled software engineers. But education is not a core competence of most technology companies. We have to find a better solution.

Mr. President, you seem to have a blank page on this topic as of today. I hope your newly appointed education secretary, Betsy DeVos, will reshape the U.S. education model to better produce the types of workers the U.S. economy really needs. Many of those blue collar jobs you want to restore are simply dead, just like the knocker-upper and lamplighter jobs of earlier times. They’re not coming back. And until robots can code better than humans, you can be sure that there will be enough employment for all Americans who want a good job. I think there are millions of Americans who want the skills to pick up a mouse and get to work.

You can be the President who made it so.

Sylvain Kalache is a cofounder of Holberton School, a two-year training program for software engineers.