Snap is giving its hardware credentials a notable boost today with the news that it’s opening online sales for its connected glasses.

You may recall that Snapchat rebranded as Snap back in September and launched its first piece of hardware — called Spectacles — sunglasses that record 10-second snippets of video. The funky connected specs were hard to buy immediately after launch, but Snap gradually made them easier to purchase through pop-up stores.

Now, however, anyone in the U.S. can buy them through Snap’s online store for $130, though you may have to wait up to four weeks for delivery. 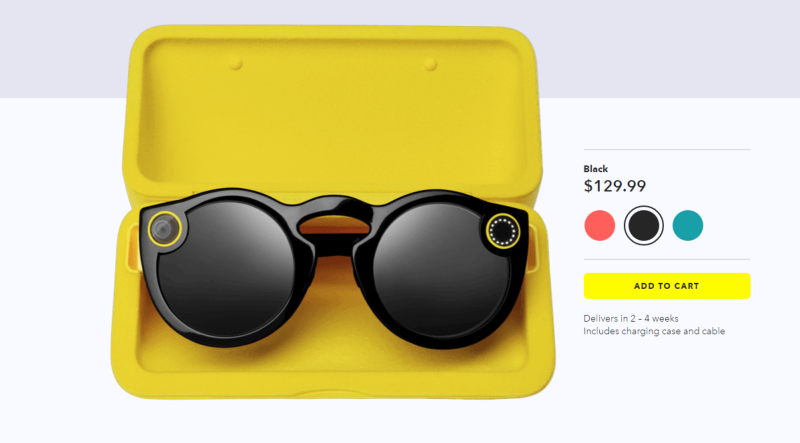 Earlier this month, the social networking starlet finally filed its S-1 paperwork with the Securities and Exchange Commission (SEC), which triggered the process of Snap becoming a public company. In its filing, Snap provided some revelations pertaining to its numbers, but buried within the deluge of data the company also revealed that it planned to significantly broaden the distribution of Spectacles this year. Spectacles represented a sizable part of the filing, with a total of 45 mentions, however Snap also cited Spectacles as a risk factor — it cannot guarantee it will make a success of what is an expensive hardware project.

Snap’s pre-IPO roadshow is currently underway in London and will be traveling the globe to generate hype and create distance from any notion that the company is a simple photo-sharing app for teenagers. Instead, it’s setting out to build hardware gadgets and software that can tempt advertisers on board and combat the mighty Facebook.

Snap doubled its acquisitions in 2016 as it prepared to transform itself into a money-making machine. By going public, an event that is expected to finally happen next month, the company hopes to raise around $3 billion and is seeking a valuation of up to $18.5 billion.