Facebook’s mobile app analytics offering hit a milestone today — it’s now providing insight for more than 1 million apps, websites, and bots, a 25 percent increase from September. In conjunction with this announcement, Facebook is also launching new features which should help educate marketers and developers about what actions to take.

Facebook Analytics for Apps launched at F8 in 2015 and bears similarities to Google Analytics, Twitter’s Answers product that was recently purchased by Google, Localytics, App Annie, Adobe, and others. Surpassing the 1 million mark is notable, but it perhaps isn’t that surprising given the adoption of other Facebook properties and services. Additionally, with developers likely growing increasingly concerned about Twitter and taking a particular interest in social data, Facebook is seeing more interest.

“It’s more than getting an app installed,” Facebook product manager Josh Twist once told VentureBeat. “We can help drive installs on mobile apps, but that’s not the end of the journey. Facebook knows the way to drive retention and engagement and conversion hangs on understanding people.”

Businesses that use Facebook Analytics for Apps include Skyscanner, Cheetah Mobile, MomentCam, DoubleU Games, and Clash of War.

And, like many analytics products, Facebook hasn’t rested on its proverbial laurels when it comes to updating the service’s capabilities. Beyond telling developers a user’s age, country, language, job title, education, relationship status, and what Facebook Pages the user likes, the company has extended Facebook Analytics from just apps to include desktop and mobile web presences. Additionally, it shows how widely content from a site is shared on Facebook, allows developers to customize their audience to find out targeted information, and more. 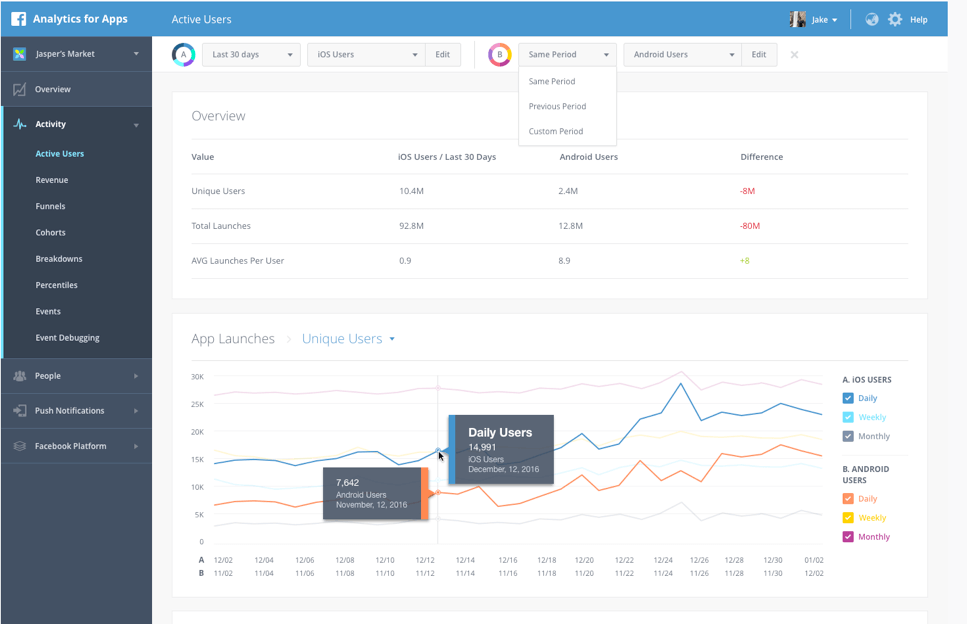 Above: Facebook Analytics dashboard lets you compare customer segments based on specific attributes.

But as Facebook continues to grow — now at 1.86 billion monthly active users — giving developers all of this data isn’t enough. The company has to provide solutions that will take this information and parse it in a manner that is actionable. During an interview in September, Twist acknowledged that more work needed to be done educating brands, marketers, and developers on what data from Facebook Analytics means.

“People spend a lot of time in their analytic tools and want to make [them] more effective so they can spend more time on higher-level activities,” Twist said. “We’re passionate about making life better — we’re going deep into core business intelligence capabilities to make it better, so when people use [Facebook Analytics for Apps], productivity goes through the roof.”

Two new features are being introduced to facilitate this education. The first enables comparison of two customer segments side by side, while the second adds support for domain-level reporting.

In terms of customer segmentation comparisons, marketers can analyze how different groups behave — targeting activity such as active users, revenue, or events. Those running a marketplace will be able to better understand how potential customers view their weekly specials on either their iOS app or through the mobile web.

Above: Facebook now shows you referring domains in its analytics service.

With domain-level reporting, Facebook builds on its cross-platform analysis offering to now show you referral traffic from websites. Marketers will now be able to run queries around particular events by domain or set the source as a condition when running customer segmentation.

The expectation is that with these additional features, developers and marketers will be able to make sense out of all the noisy data and discern what actions they need to take in order to improve conversions and increase transactions.