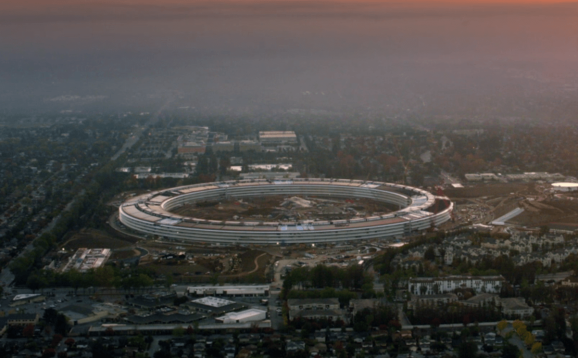 The 175-acre campus, which has hitherto been referred to as Apple Campus 2, will be known as Apple Park and will open to some employees starting in April. The full process of migrating the company’s 12,000 employees in the region will take six months, according to a press release, with construction continuing through the summer.

Apple first unveiled its new campus back in 2011, when Steve Jobs presented plans to the Cupertino City Council. Six years later, the spaceship-style building is almost ready for business.

Though Apple is known for maintaining secrecy around its various projects, it’s difficult to keep a lid on a gigantic 2.8 million-square-foot building that’s in plain view, so we’ve had a good sense of the HQ’s progress since its inception. Private drones have played a big part in keeping the public updated.

Apple Park will be powered by 100 percent renewable energy, according to the company, with 17 megawatts of rooftop solar power — what Apple calls “one of the largest on-site solar energy installations in the world.”

To commemorate Jobs, who would’ve turned 62 this coming Friday (February 24), Apple has revealed that it’s naming a 1,000-seat auditorium the Steve Jobs Theater. The theater, a 20-foot-tall glass cylinder that is 165 feet in diameter, will be located on one of the highest points within Apple Park.

“Steve’s vision for Apple stretched far beyond his time with us,” said Apple CEO Tim Cook. “He intended Apple Park to be the home of innovation for generations to come. The workspaces and parklands are designed to inspire our team as well as benefit the environment. We’ve achieved one of the most energy-efficient buildings in the world, and the campus will run entirely on renewable energy.”

Apple Park will also feature an Apple Store, a visitor center, and a public cafe. Employees will have access to two miles of walking and running paths, and a 100,000-square-foot fitness center.