Productivity app-maker Doist is trying to lure new customers over from the dark side by making it easier for Wunderlist users to jump ship.

You may recall that Microsoft snapped up Wunderlist’s parent company — Germany-based 6Wunderkinder — back in 2015. As is the case when any popular independent service is bought out by a corporate giant, Wunderlist’s community of users wondered whether Microsoft would ruin or kill off the app. At the time, some developers produced tools to export their data into other third-party apps. Even celebrities weighed in with their thoughts.

Oh no. @Wunderlist swallowed up by @Microsoft. Is it going to be ruined?

Fast-forward nearly two years and Wunderlist’s rival Doist, which operates the popular Todoist app, has now created an official import tool for Wunderlist users to transfer their tasks and projects. Using Wunderlist’s API, Doist can copy user data over and paste it into a new Todoist project through its own API. 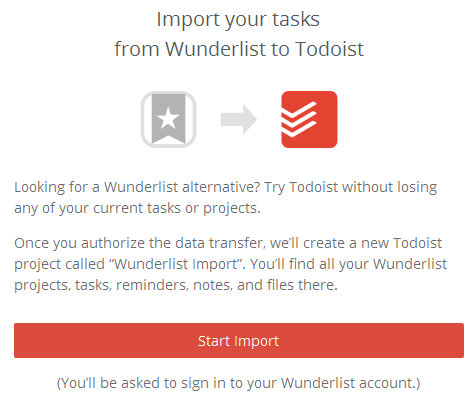 Above: Wunderlist to Todoist

There is at least one other export / import tool out there already, Todoport, that works between many of the popular productivity apps, including Wunderlist, Todoist, Asana, Google Tasks, Toodledo, and Trello — but it costs $5 for 24 hours of access. With Doist’s own incarnation, it’s free and made in-house by Doist’s own engineers.

It would have made sense for Doist to have made this tool back in June 2015, to capitalize on fears over what Microsoft may do with Wunderlist. So why now?

Well, according to a Doist spokesperson, they feel pretty confident that Microsoft will eventually fold Wunderlist into its broader productivity software environment. Certainly, Microsoft has history on that front — it acquired red-hot calendar app Sunrise in early 2015 and shuttered it 18 months later. And Microsoft is known to be working on a new productivity app codenamed Project Cheshire, which has led to growing speculation that Wunderlist will cease to be a standalone service.

In Microsoft’s defense here, it is still updating Wunderlist — just last week it was given a spring clean for bugs and minor tweaks. And back in November, Microsoft rolled out Cortana support for Wunderlist. That all said, there is an overarching feeling among some Wunderlist users that the service has been forgotten by Microsoft.

In the comments section from this December blog post, there are myriad statements questioning Microsoft’s commitment to keeping Wunderlist on a par with the competition. One example:

Please, dear Wunderlist team, share a little bit of your vision for the future of Wunderlist with us. We are heavyweight Wunderlist users and kind of feel like the app has been abandoned.

Another Wunderlist blog post garnered concerned responses from commenters in the wake of Microsoft’s decision to sunset its Sunrise app. One said:

However, a spokesperson responded to this concern at the time by saying:

….our plans with Microsoft and other teams mean that we’re working towards the goal of some very smart integrations with a bunch of apps – and a big part of that plan is to keep Wunderlist as an standalone app where you can interact with just your to-dos.

That emphatic rebuttal came more than a year ago and, well, that’s a long time in the world of technology. VentureBeat reached out to Microsoft to determine what its plans for Wunderlist as a standalone project are, and the company wouldn’t confirm or deny anything, merely stating that it had “nothing to share” on the matter.

This echoes similar responses meted out to concerned Wunderlist users in recent weeks:

@Wunderlist Hi Wunderlist, I know you can not comment on future development but could you at least deny rumour Wunderlist is closing down ..

@groovybug Sorry for the delay, unfortunately we can't give you any details on our plans yet. We're working hard behind the scenes though.

To be clear, Microsoft has not announced that it’s closing Wunderlist, or that it’s being folded into any other service it may be working on. But the fact that Microsoft hasn’t given any assurances around the ongoing speculation certainly suggests that Wunderlist’s days as a standalone service are numbered.