Pinterest today is announcing the formation of Pinterest Labs, a new research unit under the leadership of the startup’s chief scientist, Jure Leskovec.

Currently the group contains around 20 people who are spread across existing departments; they’ll keep working in their current positions, but they have the mandate to do more research-oriented activities, including collaborating with people inside and outside the company on academic papers, experimental applications, challenge problems, open source software, and releases of data. Over time, Pinterest will be increasing its research and development expenditures and bringing on people who will work completely under Pinterest Labs. And there will be office hours, seminars, and invited speakers, Leskovec said in an interview with VentureBeat.

While Pinterest Labs will certainly keep working on image recognition, it will also focus on spam filtering, ad targeting, search ranking, new user education, recommendations, user modeling, and data science in general, said Leskovec, who arrived at Pinterest in 2015 as a result of its acquisition of startup Kosei. Leskovec has since been on leave from Stanford University, where he is an associate professor.

While this is notable in Pinterest’s evolution as a company, it’s not unheard of. Facebook, Salesforce, Snap, and Twitter are among the companies that have formed research groups focused on artificial intelligence. Google and Microsoft have funded major research programs as well. Now Pinterest will be in a better position to hire top talent and “help shape the future of machine learning,” Leskovec said. 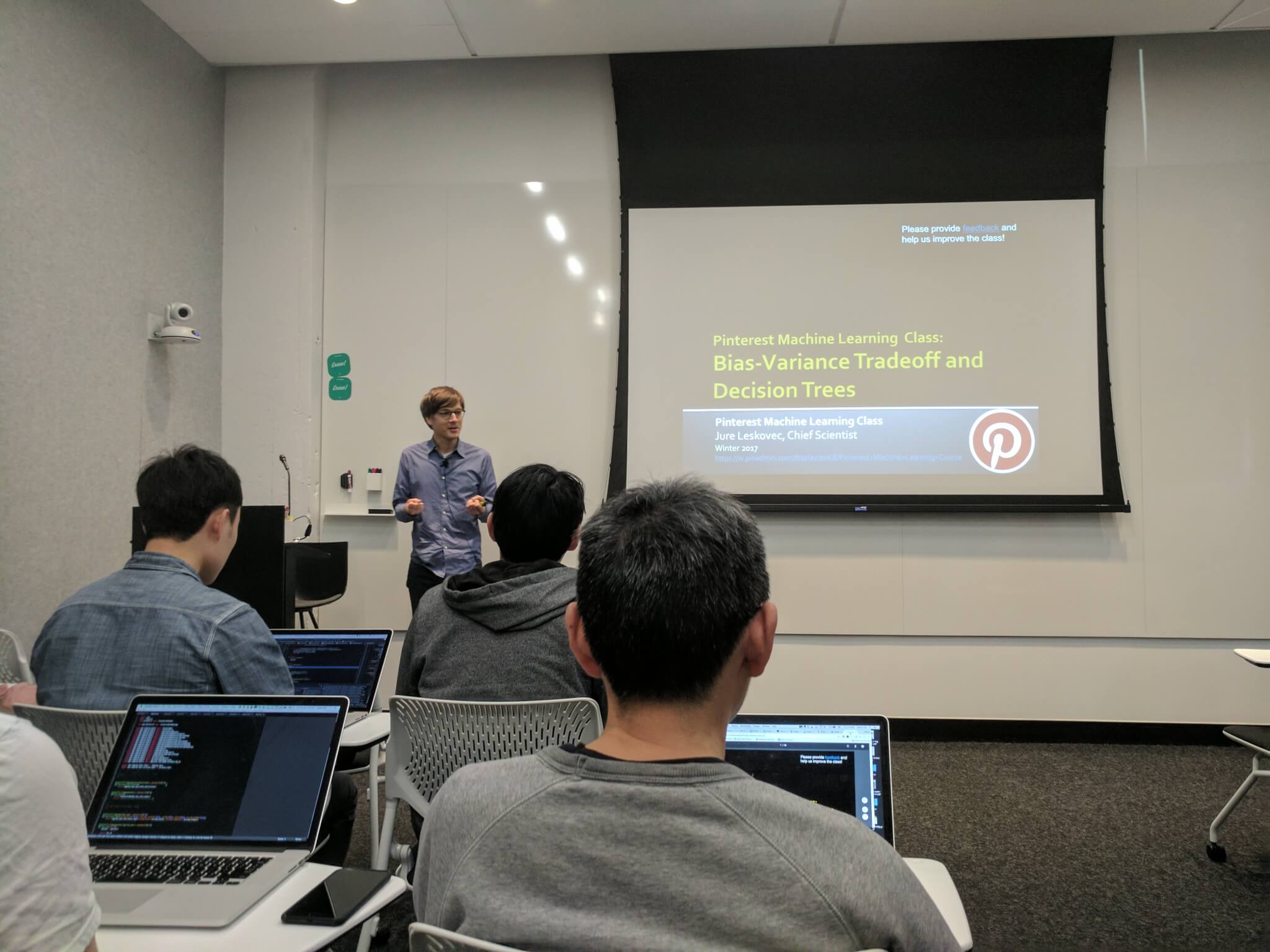 Above: Leskovec teaches a machine learning class for Pinterest employees at company headquarters in San Francisco on February 24.

Machine learning has been part of Pinterest for many years. It’s helped the company reach its 150 million active user mark, and it’s played a big part in launches of products like Lens and visual search. Now Pinterest wants to accelerate its work in a way that makes sense for its size and culture. Generally speaking, the company will share its learnings with the public, while also using its discoveries to advance its own products.

Lately Leskovec has been setting the stage for today’s launch by teaching an eight-week machine learning class for his colleagues — the longest-running employee education program so far in company history, a spokesperson said. At the fourth class on Friday, inside a classroom near the back of Pinterest’s new office on Brannan Street in San Francisco, Leskovec led a two-hour tour on decision trees and the bias-decision tradeoff, two common concepts in the machine learning field. (Previous sessions have covered linear models, linear discriminant analysis, and overfitting.) Around 30 Pinterest employees followed along with the help of Leskovec’s 56-page slide deck. Leskovec has two teaching assistants supporting him for the course, but judging by the speed and conviction with which he went through the material, he doesn’t need a whole lot of help.

Many employees left the classroom to attend an all-hands meeting, and Leskovec hung around and answered colleagues’ questions for 15 minutes. The dynamic was simultaneously academic and warm. (Google has also done machine learning training for its employees, but at Pinterest, which has more than 1,000 employees compared with Google’s 72,053, things happen at a smaller scale.) Afterward he sat down to talk about Pinterest Labs, turning down an offer to take a bathroom break.

“The point is not to now take researchers, here they are in this corner and have these arrows blinking like this,” he said, gesturing with his two index fingers toward one central spot. “I think the point is to take this research spirit and make sure it’s distributed and planted across the company. That’s why we don’t have a sign, we don’t have a corner in the room. … Lots of us would spend a few days a week working with the product team and have two desks, for example. We will embed researchers to work on problems that are hard, that are important.”

Leskovec has a blog post on the news here.