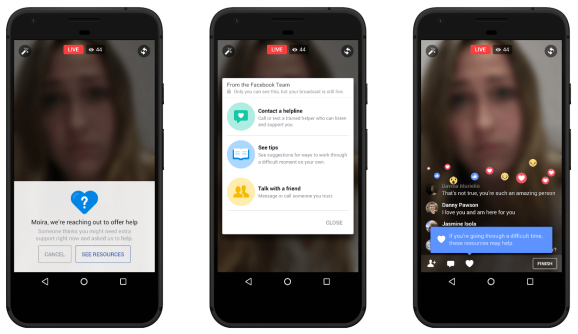 Facebook is lifting the lid on a host of new suicide prevention tools today as the social network doubles down on efforts to help curb one of the leading causes of death among 15-29 year olds.

There is one death by suicide every 40 seconds around the world, according to the World Health Organization. And although Facebook has offered suicide prevention features for many years already, much of that effort has involved direct human intervention, such as people reporting concerns about their friends. But the company says it’s now using artificial intelligence (AI) to recognize patterns based on posts that have previously been associated with suicide. Through this mechanism, Facebook may surface more prominent options for friends who want to report a concerning post.

Additionally, Facebook says that it’s testing pattern-recognition technology that automatically detects whether a post is “very likely to include thoughts of suicide,” according to a Facebook blog post today. A post flagged by Facebook’s algorithms may be manually checked by the company’s Community Operations team — even if it hasn’t been reported by a friend — and the individual may be offered support directly.

These AI-powered tests are kicking off in the U.S. now, and there’s no word yet on whether the feature will be rolled out permanently or extend further afield — it’s all about testing the water to see what works and what doesn’t.

With Facebook’s growing push into live video, the company is now expanding its existing suicide prevention tools into Facebook Live — this means that friends or strangers watching a livestreamed video can now contact the person directly or report the livestream to Facebook. This move comes almost two months after a U.S. teen reportedly broadcast her suicide through Facebook Live.

With the rise of Messenger as a standalone messaging service, separate from the main platform, Facebook has also been working with various crisis support partners (e.g. Crisis Text Line and the National Suicide Prevention Lifeline) to make it easier for those considering suicide to contact a specialist over Messenger. Moving forward, there will be an option to message with someone from a relevant organization in real time, either through the aforementioned suicide prevention tools or from the organization’s Facebook Page.