The rise of companies such as Zenefits and Gusto have enabled businesses to modernize their payroll and human resources offering, but tackling these needs can be a big task for any service provider. This is where Lively comes into play. This Y Combinator-backed startup on Wednesday launched to the public to provide employees a paperless and digital way to manage their health savings accounts (HSAs).

Established as a part of the Medicare Prescription Drug, Improvement, and Modernization Act in 2003, HSAs can be thought of as 401(k)s for health care. They bear some similarities to flexible spending accounts (FSAs), but without the time constraint — at the end of the year, your contributions can be reinvested rather than taken from you. Some have described the goal of HSAs: “making consumers bear a bigger upfront share of medical care — while making it easier to save money tax-free for that purpose — will result in more judicious use of the health system that could ultimately slow rising costs.”

Of course, health saving accounts have their critics. But if employees elect to have an HSA, Lively wants to make it easy to manage. As cofounder Alex Cyriac told VentureBeat, “Historically, HSAs have been administered by banks or large financial institutions. Not a lot of product or technology has been used in making administering HSAs simple and easy.”

Traditionally, employees needed to manage their HSA affairs in an administrative interface that was separate from where their money was housed. Lively promises to consolidate everything so there’s one place to take care of HSA needs. When you have enrolled, the company lets you set how much you wish to contribute to your account and provides a Lively-branded debit card, powered by Mastercard, that can be used to pay for qualified medical expenses. Receipts from purchases can be uploaded to Lively to store in case of auditing. 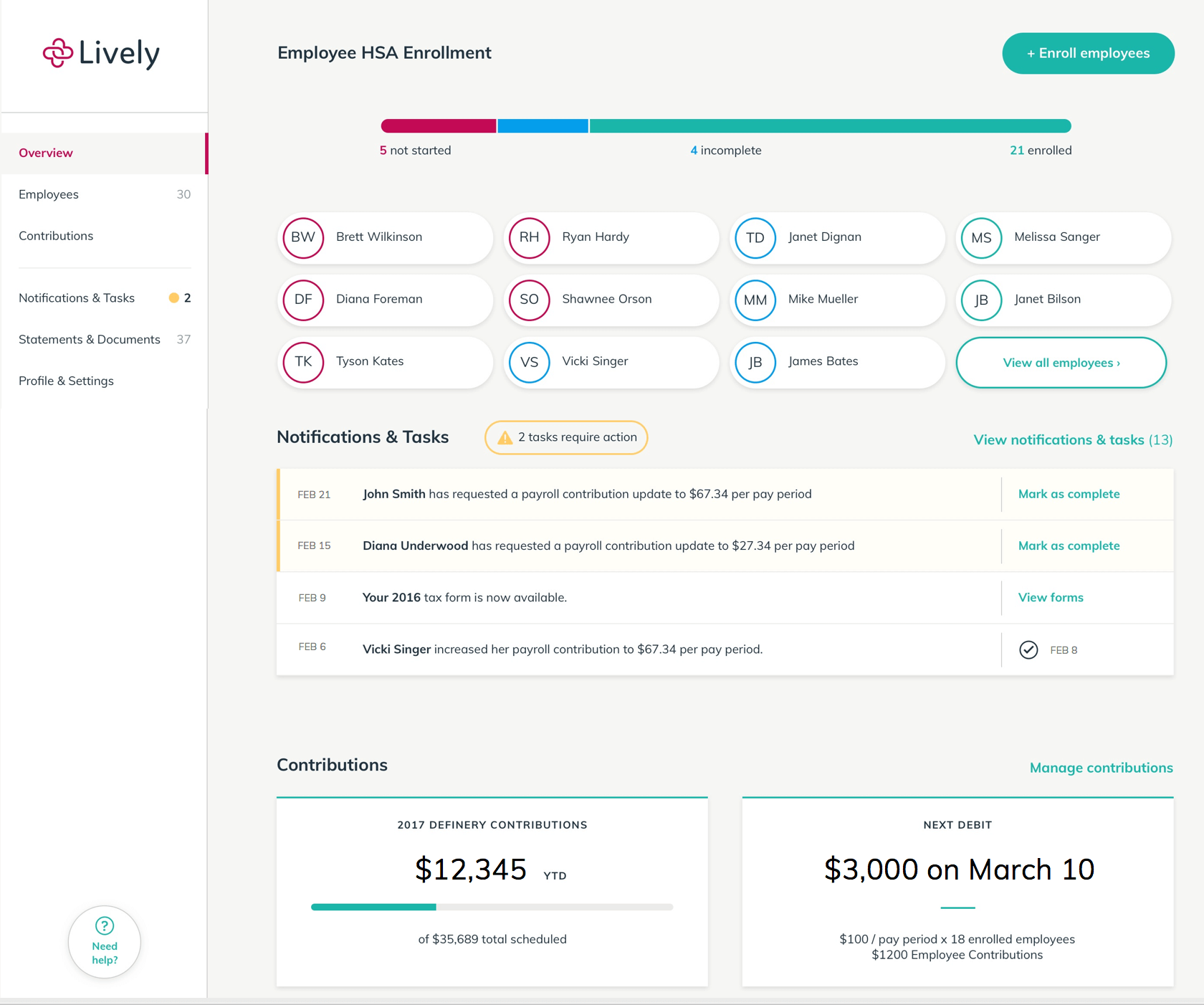 Above: The employer dashboard on Lively.

“Our mission is to help users manage spending, maximize savings and their livelihood,” Cyriac said. “The HSA market itself is growing at a staggering pace. At the end of January, there were 21 million HSA account holders, $41 billion in assets under management, and the projection is that HSA … will hit up to $1 trillion in assets. The driver is where health care is going.”

But while Lively draws some comparisons to Zenefits, it said it’s in compliance with all regulatory issues. “First and foremost, we take the regulatory side as very important for us. … HSA is regulated by the Internal Revenue Service (IRS), and there are requirements that must be satisfied,” Cyriac asserted. “All assets have to be held by a custodian — Lively has a custodial bank, which is where our assets are held.” He went on to say that while the federal regulators are satisfied, Lively also has a duty to be in compliance with its unnamed financial institutional partner.

“Much of the heavy lifting is in operational and regulatory infrastructure that we’ve built on the back-end and paid a ton of attention to. We’ve been working with our bank according to the law at every level,” stated Shobin Uralil, another cofounder. As part of this promise, Lively has brought on board the former general counsel for one of the largest HSA management firms in America as an advisor.

Before founding Lively, Cyriac oversaw operations at payroll benefits platform Justworks, while Uralil spent time within highly regulated companies in the energy industry. The lifelong friends may have worked in different areas until now, but their experience in the regulatory space has given them foresight on how to overcome obstacles that have ensnared some Silicon Valley companies.

“Through our personal experiences, we saw the value and power of HSAs, and that’s why we started [Lively],” the cofounders said. “What does it mean when you’re seeing out-of-pocket expenses and you’re not prepared for it?”

The duo does not see any existing tech company as a competitor, but believes they go head-to-head against 2,000 HSA banks such as HealthEquity, Xerox-owned BenefitWallet, and Optum Bank.

What Lively hopes will be a selling point is its fees. While the company does charge employers with more than 10 employees $4 per user per month, those with fewer employees than that don’t pay anything, and neither do individuals. While HSA banks may charge a similar amount, Lively said its key differentiator is around giving the service away for free to small businesses. Cyriac promises that employees will never have to pay a fee. “Our goal is to help people save for free,” he said.

To date, Lively has raised $715,000 in funding from not only Y Combinator, but also Boston-based institutional venture firm PJC and various angel investors.