Despite a tough few quarters last year, including market share losses throughout, Fitbit is still the king of wearables. Big tech companies were expected to dominate just as they have with smartphones and tablets, but the little guy continues to hold on. In Q4 2016, Fitbit took first place again, Xiaomi held onto second, and Apple came in third.

Mobile companies shipped a total of 33.9 million wearables worldwide last quarter. That figure is up 16.9 percent from the 29.0 million units shipped in Q4 2015. The latest figures come from IDC, which summarized its findings in the following chart: 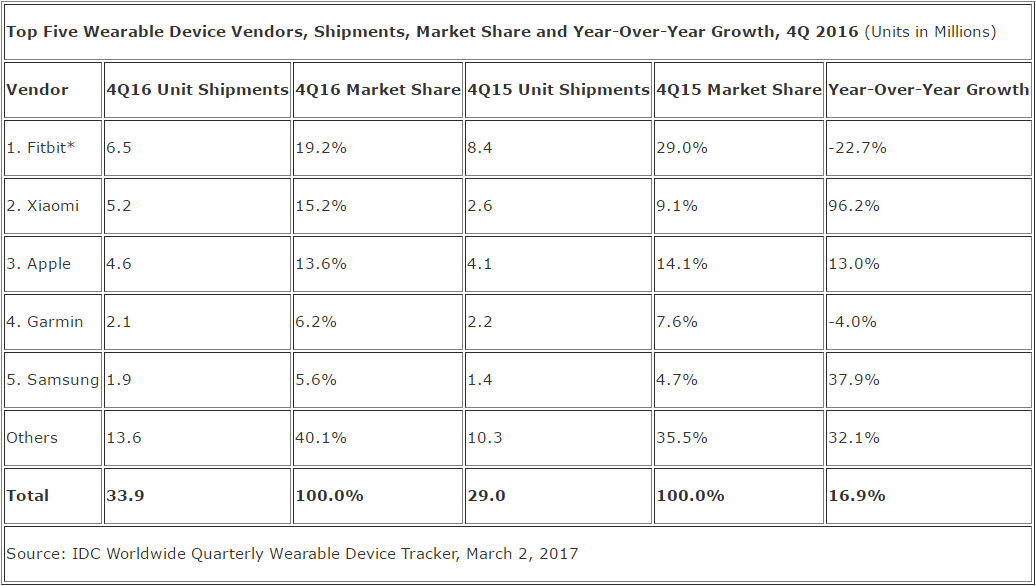 As you can see above, Fitbit’s market share actually decreased by 9.8 percentage points (from 29.0 percent to 19.2 percent), as the company shipped 1.9 million fewer devices (6.5 million total). IDC explained that this is due to the company remaining heavily focused on the U.S., a market that is quickly approaching saturation for fitness trackers.

Xiaomi meanwhile gained market share, up 6.1 points (from 9.1 percent to 15.2 percent), thanks to shipping an additional 2.6 million units (5.2 million total). The Chinese company has kept up its low-cost strategy with inexpensive fitness trackers. While it is gaining on Fitbit, Xiaomi’s success is solely based in China — IDC argues it lacks the expertise and brand recognition for international expansion.

Apple meanwhile slipped 0.5 points (from 14.1 percent to 13.6 percent), despite shipping an additional 0.5 million units (4.6 million total). This was the company’s best quarter ever in the wearables market, thanks to the lower entry price point and the inclusion of GPS on the Watch Series 2.

Garmin’s share slipped 1.4 points to 6.2 percent, while Samsung gained 0.9 points to 5.6 percent. Both are a far cry from the double-digit percentage shares of their competitors.

The fourth quarter results are very much in line with the full 2016 year results, at least when it comes to placement: 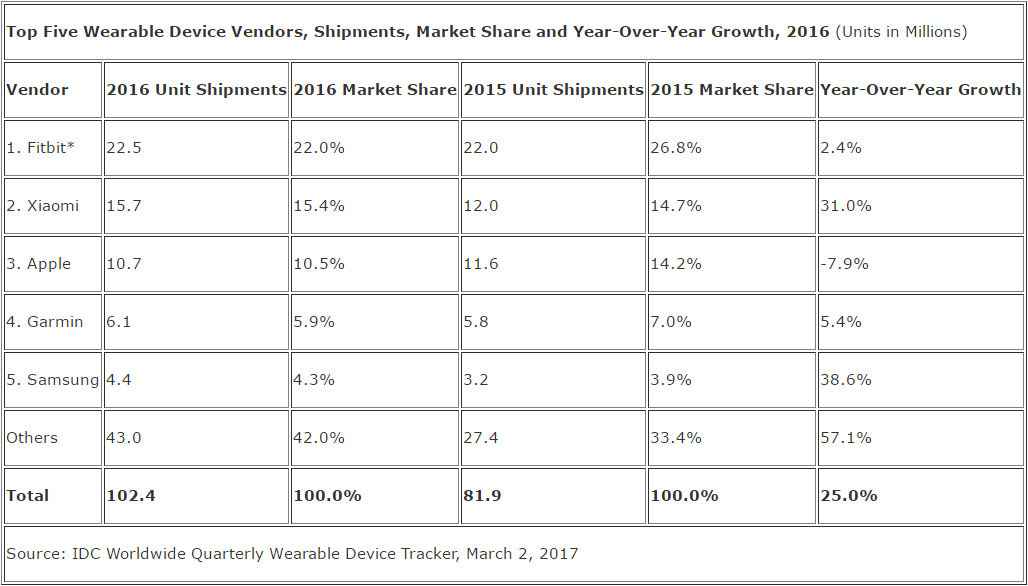 Fitbit, Xiaomi, and Apple are the leaders, in that order. Garmin and Samsung are holding on to remain in the top five, but could still be displaced.

“Like any technology market, the wearables market is changing,” IDC research manager Ramon Llamas said in a statement. “Basic wearables started out as single-purpose devices tracking footsteps and are morphing into multi-purpose wearable devices, fusing together multiple health and fitness capabilities and smartphone notifications. It’s enough to blur the lines against most smart wearables, to the point where first generation smartwatches are no better than most fitness trackers. Meanwhile, smart wearables are also evolving. Health and fitness remains a major focus, but once these devices become connected to a cellular network, expect unique applications and communications capabilities to become available. This will also solve another key issue: freeing the device from the smartphone, creating a standalone experience.”

Overall, though, the wearables market is still very small, and it’s not clear where it’s headed. Vendors continue to push a wide variety of offerings, including everything from fashion accessories to powerful devices. And in many cases, there is a huge amount of data collected behind the scenes — a reminder of the immense potential the category has, even as consumers remain cautious.