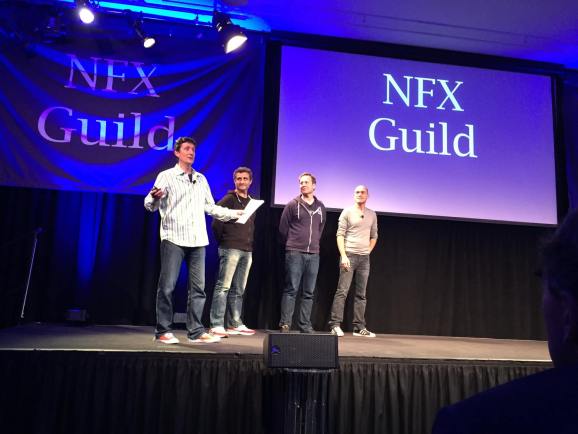 NFX Guild, a San Francisco-based accelerator program, hosted 21 startups at its fourth demo day this morning. The presenting companies are the latest additions to NFX Guild’s network of 66 alumni companies, which include Goldenkey, Ivy, and Zengaming. NFX Guild’s new entrepreneurs receive $120,000 in capital in exchange for a 7 percent equity share and such benefits as mentoring and networking.

At the Computer History Museum in Silicon Valley, entrepreneurs went on stage to pitch a field of angel and VC investors like Tim Draper and Andreessen Horowitz’s Jeffrey Jordan. Unlike Y Combinator or 500 Startups, NFX Guild does not have an open application policy. Startups must be referred to selected “scouts” before they are invited to apply to the accelerator.

NFX Guild was founded in 2015 by serial entrepreneurs James Currier, Stan Chudnovsky, and Gigi Levy Weiss to provide entrepreneurs with what they call a “network effect.” They aim to help founders reach product market fit faster by connecting them with the right people. NFX Guild is funded by CRV, Shasta Ventures, Greylock Partners, and Mayfield Fund.

This latest batch of startups represents health care, cybersecurity, augmented reality (AR), gaming, and consumer products, among other fields — half are B2C and half are B2B.

One new NFX Guild member is Frisbee, a video messaging platform launched by former Facebookers. “Video is taking over social,” said CEO Vadim Lavrusik, during his pitch. “The camera is the keyboard now.” The startup’s beta product saw users send approximately 12 videos a day and sees itself as a mode of communication that could take over simple messaging.

At least one other incoming member is also banking on new ways of communicating. Called Volley, this startup has created what CEO Max Child termed “conversational gaming.” Translation: building games on top of platforms like Facebook Chat or Amazon’s Alexa.

Moving into the virtual world, Aros has developed software to use AR for outdoor activities. CEO Alon Getz, a former Israeli Air Force pilot, told the audience of potential investors that, so far, businesses have shied away from using AR outdoors because of challenges like weather and connectivity.

Death, however, remains the ultimate challenge, and not just for startups. Parting is a startup entering the funeral industry by providing business software to funeral homes. The SaaS-based business helps funeral home operators with logistics, advertising, and managing vendors. “Death is not something we like to think about, which is maybe why the tech industry has stayed away from it for so long,” said CEO Tyler Yamasaki. “It’s time for a rebirth.”

But while we’re all still alive, let’s try and make the most of it. That’s the pitch from Summer, a startup that wants to help employees better manage stress and anxiety at work. The startup combines cognitive behavioral therapy (CBT) with mindfulness via an online coach-assisted program. The service ranges from $25 to $300 per year to assess employees’ well-being and match them with the right coach. “Until robots take our jobs, we all have to work!” said CEO Dhaval Chadha.

NFX Guild recently announced the launch of Signal, an online portal for founders to build their target investor list. So far, 5,500 investor profiles have been crowdsourced by users of the platform — 1,400 of these investors have already claimed their profiles and are now active on Signal. The portal is free and available to every founder, even non-NFX Guild alumni. And no invitation is required.