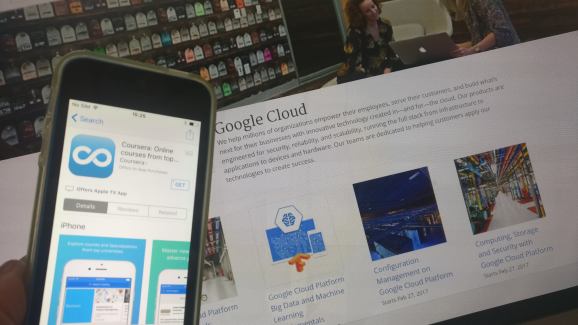 Google has turned to online education platform Coursera to launch a handful of training courses centered on the Google Cloud Platform.

Founded out of California in 2012, Coursera partners with businesses and educational institutions to serve more than 20 million online students a range of courses across business, technology, science, and more. It’s one of a number of so-called MOOCs — massive open online courses — to gain traction in recent years, and has raised around $150 million in VC investment.

Back in September, Google announced the launch of Google Cloud, which was essentially a rebranding and repackaging of its numerous cloud services, including its public cloud infrastructure, Google Apps for Work, and various enterprise applications. With companies increasingly embracing the cloud for their in-house operations, Google now wants to school firms in everything from data analytics and operations, to machine learning and configuration management. It’s all about filling the skills gap and giving businesses the confidence to migrate to the cloud.

“As more and more companies wish to take advantage of what cloud computing, data analytics and machine learning can do for their businesses, the gap between the knowledge needed to move to the cloud and the demand for such skills has grown enormously,” explained Louise Byrne, head of cloud training delivery at Google. “Lack of expertise and cloud skills is often cited as the top challenge for companies wishing to migrate their business to the cloud.”

The courses have been developed by “Google experts,” according to a blog post post on the matter, who also lead on the teaching side of things.

Today’s launch comes four months after Google snapped up Qwiklabs, a startup specializing in training courses for people to learn all about public cloud infrastructure services. And that acquisition, it seems, was the genesis for this latest tie-up with Coursera.