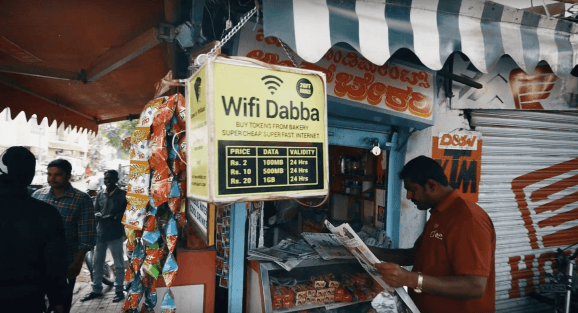 For years, companies like Facebook and Google have been touting plans to improve internet connectivity around the world, either through balloons, drones, or partnering with telecommunication companies. A country of particular interest has been India, with a variety of different efforts being made to improve access to the web. But as incumbent network providers battle among themselves and outside third-parties struggle to break in, the cost of the internet remains unreachable for many people. Wifi Dabba is a startup with a mission to bring low-cost internet access to India, starting in retail stores.

Started by Karam Lakshman and Shubhendu Sharma, this Y Combinator-backed company wants to accelerate development of publicly accessible hotspots in India, where there are currently 30,000 as opposed to the 10 million in the U.S. “Our long term goal is to become India’s first wireless ISP and reach 100 million customers in the next 3 years,” remarked Lakshman in an email with VentureBeat.

By installing Wi-Fi access points at small merchant locations such as tea stalls and bakeries, customers can purchase internet time the same way as baked goods and beverages. “In India, there is a tea stall or a bakery every 100 yards in every city. There are an estimated 50 million such micro-businesses in the country. They are part of the daily routine of every Indian’s life,” he went on to explain. “Our solution is unique because we’re sachet-sizing the internet and selling it at an affordable price point at a convenient location.”

Currently Wifi Dabba is available in 70 locations across Bangalore, but it plans to be in 100 this month and 30,000 by the end of the year — it has 3,000 stores that are on a waiting list to participate. There are three daily pricing tiers customers can choose from, with costs varying by data usage. For $0.03 (Rs. 2), the service provides 100MB, while $0.15 (Rs. 10) has 500MB and $0.30 (Rs. 20) has 1GB. Customers will need to pre-pay for internet access with tokens from local merchants, a practice which largely doesn’t exist in India, but it’s a way a majority of mobile consumers are believed to pay for connections.

Lakshman and Sharma came across this problem back when they were building consumer apps in the past few years. The feedback they received wasn’t about their work, but the cost to download the app and the data consumption, something that is a valuable commodity in the country. “We realized that while the middle class segment of India can afford internet access, the vast majority, hundreds of millions of people, cannot,” Lakshman stated.

Wifi Dabba has partnered with five internet service providers in India that are providing an average of 100 megabits per second connections to each location.

The company’s approach has similarities with what Facebook and Google are doing, providing more internet hotspots throughout India, but there are differences. The first is that while the technology giants are looking at providing free public Wi-Fi within Indian train stations or in other areas where masses congregate, Wifi Dabba is looking at smaller shops while also being like Comcast’s Xfinity service for businesses.

“What makes us attractive to merchants is that we’re offering them a new product to sell to their customers. They sell Wi-Fi the same way they sell biscuits,” Lakshman said. “We have a 80/20 revenue share with the merchants so they make money on each customer they sell Wi-Fi access to. Each location becomes profitable in about four months. When we started Y Combinator, we had five locations, three of which are already profitable.”

And while Facebook and Google have run into obstacles such as concern over net neutrality, Wifi Dabba said it’s not following the same path. It claims that customers will receive full internet access and the service isn’t subsidized by ads or any “other dark pattern.” “We are in no way similar to Facebook, Google, or any other attempt at undermining net neutrality,” the company declared.