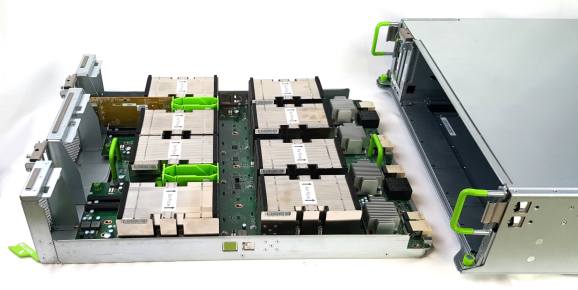 Among the machines is Big Basin, a new model of server containing graphics processing units (GPUs) that will be useful for artificial intelligence. Facebook unveiled its original GPU server, codenamed Big Sur, in 2015.

“The thing with Big Sur is the compute motherboard was actually in the box along with PCIe connections to eight graphics cards,” Facebook engineering manager Eran Tal told VentureBeat in an interview. “The big change with Big Basin is we took the motherboard out. … We need a head node to connect. There’s more I/O [input/output] bandwidth to hook up to for the monstrous Big Basin.”

In removing the motherboard, Facebook has also shrunk the size of the box — it takes up three rack units (RU) instead of four, so it’s shorter, Tal said.

A Big Basin box connects to a new server called Tioga Pass, which itself is a follow-up to Facebook’s Leopard server. Tioga Pass and Big Basin sit in the same rack, with a cable running from one to the other, Tal said.

Using these machines, Facebook can now train machine learning models that are 30 percent larger than those on Big Sur, and which yield a 100 percent improvement on the ResNet50 neural network, Tal said.

Facebook today is also revealing the second version of its Yosemite server and its Bryce Canyon storage server, which is an upgrade from the Open Vault (Knox) machine. Facebook established the OCP in 2011.

A blog post has more detail on the new gear.