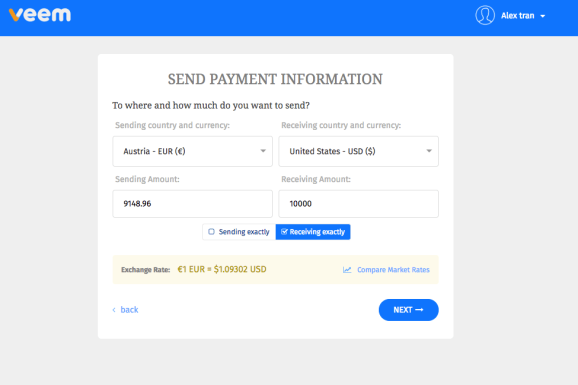 Veem announced today that it has closed a $24 million funding round. The startup offers small and medium-sized businesses (SMBs) around the world an easy solution for sending and receiving money. More than 95 percent of all businesses across the world — some 20 million — are SMBs, which represents an enormous potential market.

“While enterprise-sized businesses can rely on Treasury departments or deep bank relationships to manage their global payments, SMBs typically have to deal with the archaic, cumbersome, expensive world of bank wires,” wrote founder and chief executive Marwan Forzley, in an email to VentureBeat.

Consider a small business in Malaysia that wants to wire money to another business in Ukraine. Using Veem, both parties create profiles, link their bank accounts, and send the money for receipt — usually overnight, though the process can take three to four days.

The startup doesn’t charge a commission on transactions, but instead takes a spread on the currency exchange, starting at 1.9 percent — transaction volumes over $25,000 can see fees go down to 1.5 percent. These fees are well below the three to six percent rates charged by banks, according to Forzley. For same currency exchanges (USD-USD), Veem charges a $15 receiver fee per transaction.

The startup occasionally turns to blockchain technology for certain transactions, but the team has noticed some constraints. “The limits of blockchain liquidity and its volatility can outweigh the advantages gained in speed and tracking transparency,” said Forzley. The system does not take or deliver blockchain currencies such as Bitcoin.

Formerly known as Align Commerce, the startup changed its name to Veem as a snappier alternative, Forzley said. “Next time, just Veem it,” he wrote. But it sounds an awful lot like Venmo, the digital wallet that lets you make and share payments with friends. However, Veem distinguishes itself by providing its services to businesses, not individuals.

TransferWise, which recently launched an option for businesses, could be viewed as a competitor, although Forzley says they “still put a lot of burden on the sender in terms of form requirements and charging fees.” He considers banks to be Veem’s main competition.

The new money will be used to further develop the platform, make additional hires, and expand into new markets. Founded in 2014, the San Francisco-based startup currently has just under 50 employees.