For many years, the auto industry has hinted at a distant future in which cars would connect to each other in real time. If there’s an ambulance up ahead, the car could alert you and even start braking. If there’s a red light and you aren’t responding to it, the car might send a vibration through the steering column. As a journalist, I’ve been hearing about proprietary signals that use the 5.9 GHz spectrum for decades. The technology is called Dedicated Short-Range Communications (or DSRC), and it’s not all that different from the wireless you might be using to access this article. The main benefit of DSRC is that it’s a safe and reliable signal that allows cars to connect while they’re are about 1,000 feet away from each other.

Over the past few years, I’d heard about some limited tests with the technology in places like Las Vegas and Michigan, and it seemed to be getting closer and closer, but I had to wonder when it would ever actually arrive.

Now, it’s finally here — in a production car you can actually buy. The caveat, of course, is that everyone else needs to have their car equipped for it to work to its full potential. But it’s still worth tracking its development, if not investing in the technology and perhaps using in your own commute.

The 2017 Cadillac CTS is the first car I’ve seen in person that has DSRC. I’m at the Twin Cities Auto Show and the CTS is here, it’s activated, and it’s a reality.

The car can only share location data, speed, direction, and traffic info with other CTS cars (because they are the only ones that support DSRC in North America, for now). But if a CTS ahead of you has hazard lights on, you’ll see a warning in your dash. If there’s an issue with slick pavement or snow and another CTS has a StabiliTrak, traction control, or anti-lock brake event, you’ll also get a notice. The system is not tied to braking (at least, not yet) but that’s something Cadillac should consider for a future version.

As usual, I like to think about where this is heading. Beyond the alerts, future cars could swerve, stop, accelerate, or perform other maneuvers based on the actions and location of other cars. Right now, it’s unlikely someone around you  will have a CTS equipped with the feature, although a rep at the car show told me she saw several of them commuting in Detroit at once.

But I’m excited to see where this leads for Cadillac — and to see it expand to other cars in the GM line. 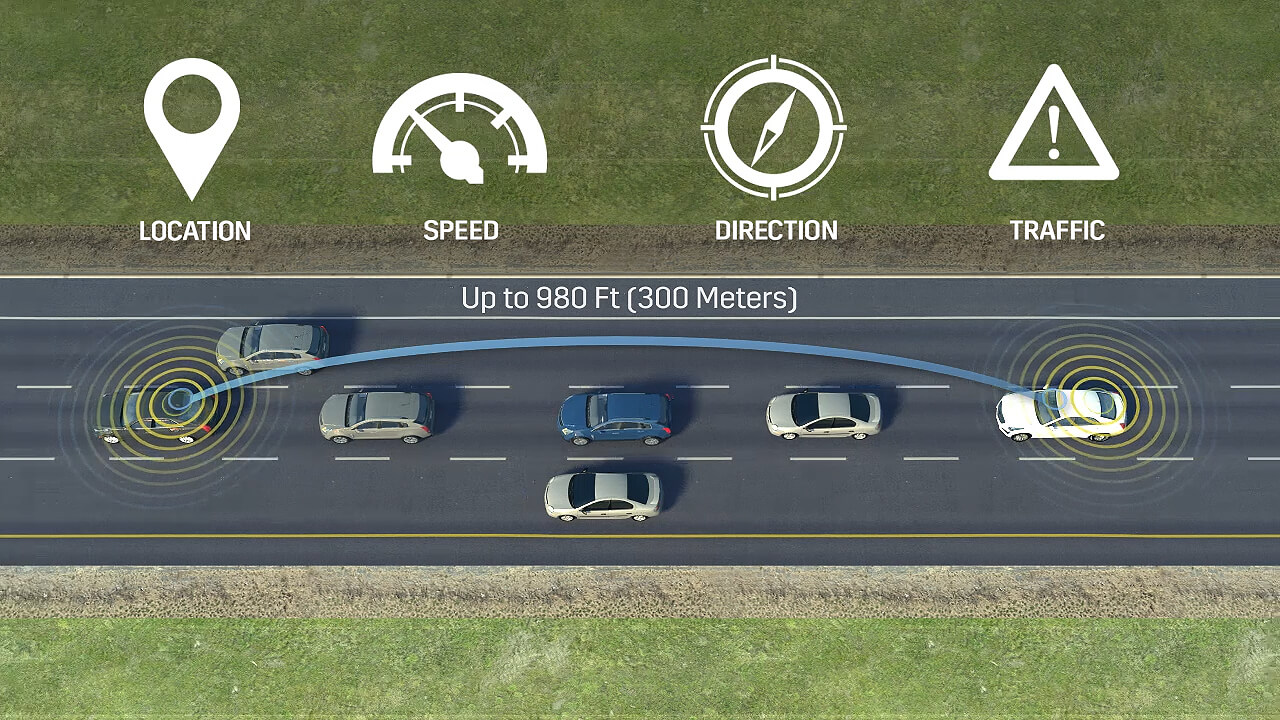 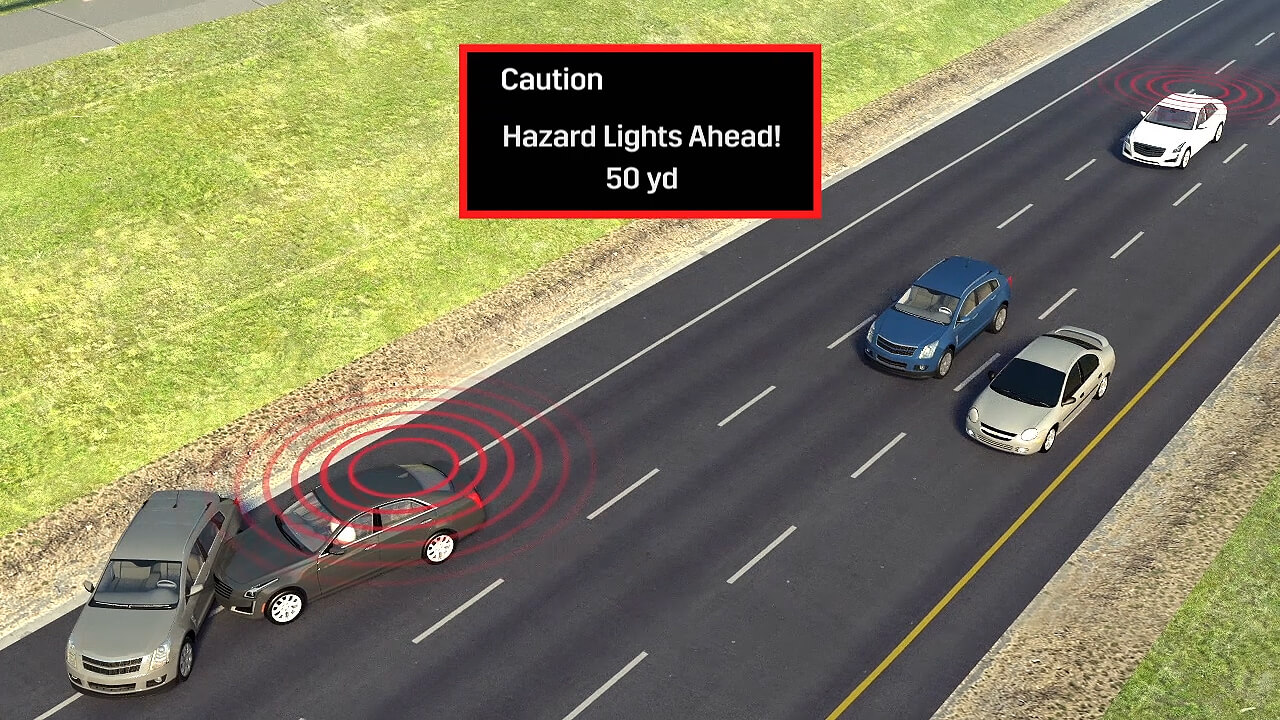 Above: When a V2V-equipped vehicle ahead is detected to have its hazard lights on, 2017 Cadillac CTS drivers will get a “Hazard Lights Ahead” alert with the vehicle’s estimated distance, allowing drivers to safely maneuver away from the hazard. 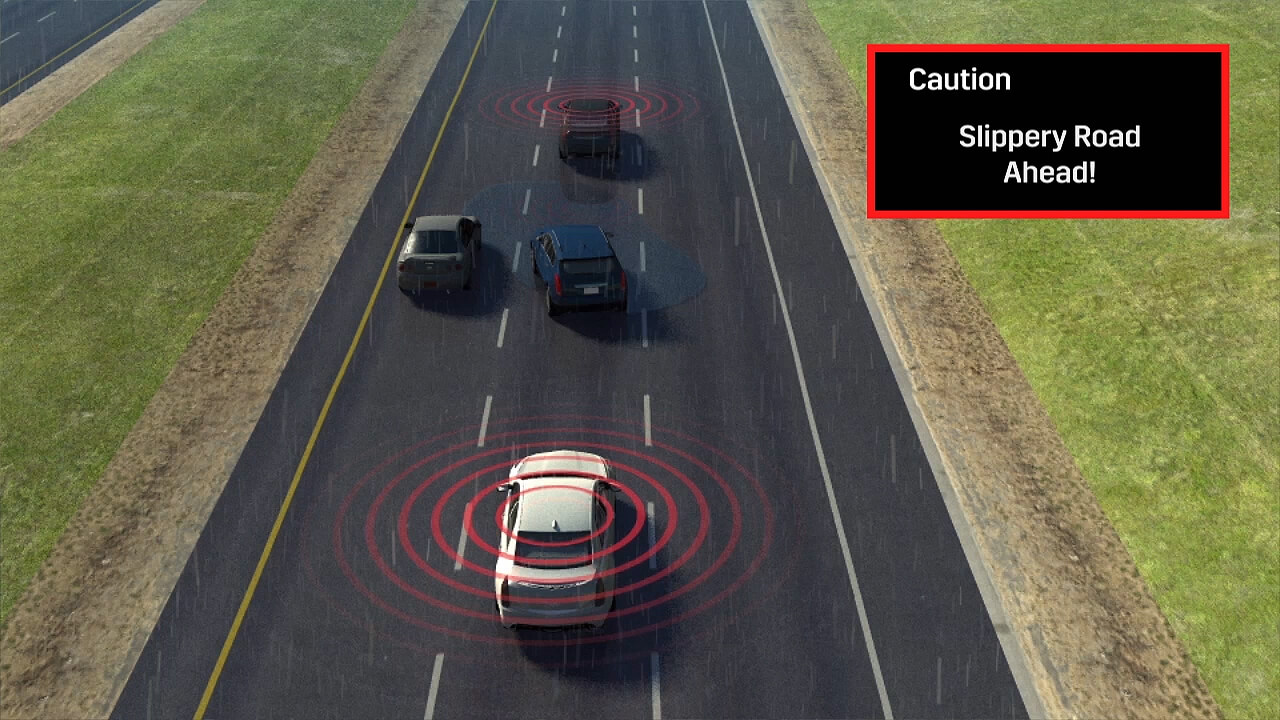 Above: When a V2V-equipped vehicle ahead is detected to have a StabiliTrak, traction control or anti-lock brake event, 2017 Cadillac CTS drivers will get a “Slippery Road Ahead” alert, allowing them to slow down and carefully proceed.

Above: When a V2V-equipped vehicle ahead is detected to have its hazard lights on, 2017 Cadillac CTS drivers will get a “Hazard Lights Ahead” alert with the vehicle’s estimated distance, allowing drivers to safely maneuver away from the hazard.

Above: When a V2V-equipped vehicle ahead is detected to be braking hard, 2017 Cadillac CTS drivers will get a “Hard Braking Ahead” alert, giving them extra time to react.