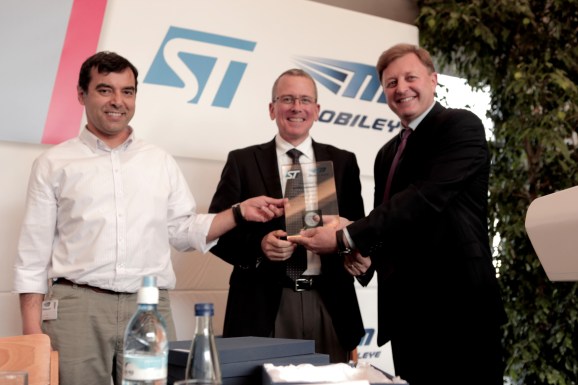 Updated with confirmation of the acquisition.

Intel is buying Israeli computer vision company Mobileye in a deal worth $15.3 billion.

Reports of the acquisition first started circulating in local publications early this morning, but Mobileye has now formally announced the deal. Intel is offering $63.54 per share in cash, which represents a premium of around 33 percent on Mobileye’s previous market closing price.

Founded in 1999, Mobileye develops the visual smarts behind cars’ driving assistance systems and includes adaptive cruise control, lane departure warnings, and distance keeping. Its technology is already used by major brands, including BMW, Volvo, Buick, and Cadillac. Back in July, BMW, Intel, and Mobileye announced plans to put self-driving cars into full production by 2021, and earlier this year the trio committed to putting 40 autonomous test cars on public roads in the second half of 2017.

Intel has made no secret of its interests in the burgeoning self-driving car industry. As a chip maker, Intel’s interests may not seem entirely intuitive at first, but when you consider that autonomous vehicles require a great deal of computing power to operate, Intel’s push into this area does actually make sense.

“This acquisition is a great step forward for our shareholders, the automotive industry, and consumers,” said Intel CEO Brian Krzanich. “Intel provides critical foundational technologies for autonomous driving, including plotting the car’s path and making real-time driving decisions. Mobileye brings the industry’s best automotive-grade computer vision and strong momentum with automakers and suppliers. Together, we can accelerate the future of autonomous driving with improved performance in a cloud-to-car solution at a lower cost for automakers.”

Mobileye went public on the New York Stock Exchange (NYSE) back in 2014, and though its share price is down from its $61 peak in 2015, it has been steadily climbing throughout 2017 and currently sits at around $47 — up $10 from its debut trading price.

The new unit will constitute Mobileye and Intel’s Automated Driving Group and will be headed by Mobileye cofounder and CTO Amnon Shashua out of Israel. The transaction is expected to close within the next nine months.

“By pooling together our infrastructure and resources, we can enhance and accelerate our combined know-how in the areas of mapping, virtual driving, simulators, development tool chains, hardware, data centers and high-performance computing platforms,” explained Ziv Aviram, Mobileye cofounder and CEO. “Together, we will provide an attractive value proposition for the automotive industry.”

While the history of self-driving vehicle development goes back decades, we’ve seen a concerted push in recent years by tech companies and car brands looking to take things to the next level. The world’s first public self-driving taxi service hit Singapore roads back in August, while Uber followed shortly in the U.S. Back in December, Alphabet’s self-driving car subsidiary Waymo gave a first glimpse of its new autonomous minivans.

For vehicles to maneuver at high speeds through heavy traffic and poor weather conditions they must be equipped with quality cameras and sensors capable of processing detailed imagery, which is why we’re seeing significant investment in this area. California-based Tetravue recently raised $10 million from Samsung, Foxconn, and others to arm self-driving cars with ultra high-resolution 3D image-capturing technology, while Intel recently snapped up computer vision startup Itseez and Cruise Automation was bought by General Motors last year for more than $1 billion.