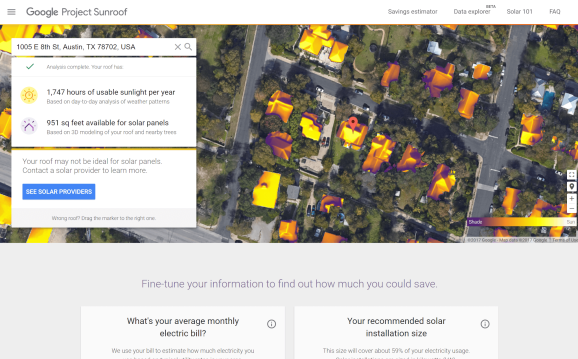 Google today announced another expansion of Project Sunroof, its web app for showing how much money you can save by installing solar panels at home. Now people can check locations in areas within all 50 U.S. states.

That’s up from 42 states in May 2016, 9 states in December 2015, and just 3 metro areas in August 2015, when Google first announced the initiative. Now Google has determined how much solar power panels can collect on more than 60 million buildings across the country, Google product manager Joel Conkling wrote in a blog post.

The service now lets people check locations in Idaho, Mississippi, and Texas, among other states. The city with the greatest solar potential in terms of number of gigawatt-hours (GWh) per year is Houston, Conkling wrote.

Google uses solar farms to generate energy for its facilities, including data centers. In December the company said it would become completely reliant on renewable energy in 2017.

In November Google introduced a Data Explorer for Project Sunroof that provides estimates of the effects of switching to solar across entire communities.