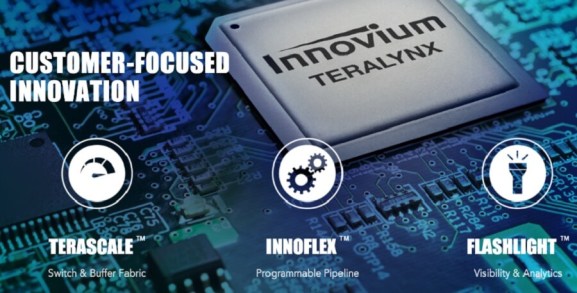 Silicon Valley startup Innovium has raised a funding round of $38.3 million to accelerate the commercialization of Teralynx, its fast data center networking chip family.

San Jose, Calif.-based Innovium is making a family of chips that can transfer data at a range of 3.2 terabits per second to 12.8 terabits per second. Innovium is unveiling its chip designs today for what it calls the world’s highest-performance and most scalable Ethernet switch chips. Such chips are aimed at moving data around in data centers at lightning speeds.

Economics, agility, and flexibility are rapidly driving customers to move IT to the public and private cloud. Intel predicts that 70 percent to 80 percent of all server systems will be deployed in “large scale data centers” by 2025. In addition, applications such as 4G/5G, video, artificial intelligence (AI), machine-to-machine communication, and distributed storage are creating explosive data center traffic growth.

But that creates huge network bandwidth demands. Google’s data centers double their bandwidth requirements every 12 to 15 months, and Amazon Web Services says that its network traffic is increasing faster than compute usage. Cisco’s Cloud Index report forecasts that traffic within large-scale data centers will quintuple by 2020, along with significant IPv6 adoption and the need for lower latency.

Tatiana Evtushenkova, CEO of Redline Capital, joined Innovium’s board of directors. The new funding round brings Innovium’s total financing to $90 million to date and will be used to accelerate commercialization of the world’s fastest Teralynx chip family.

Innovium said its chip designs will enable the company to leapfrog products in the market and position it as a leader in enabling autonomous and programmable large-scale data center networks.

“We are delighted to have Tatiana Evtushenkova join our board, and welcome a range of world-leading entrepreneurs, executives, and technologists across data center infrastructure, semiconductor, and software areas to our industry board. We look forward to drawing on their collective knowledge and experience as we reshape data center networks,” said Rajiv Khemani, CEO and cofounder of Innovium.

Innovium Teralynx is a network switch that is designed to address the needs of large data centers.

“Networking silicon solutions in the market today are generic, one-size-fits-all approaches and, as a result, sub-optimal for data centers,” Khemani said. “Innovium has used a unique, singular focus on data centers to deliver the strongest set of switch capabilities that dramatically advance the future of data centers.”