Instagram Stories received live video support in January, but it provided an ephemeral experience, disappearing after 24 hours. While you could save recorded photos and videos since December, live video was an exception. But on Monday, Instagram added a feature that lets you hold onto your live broadcast and rewatch it later on. 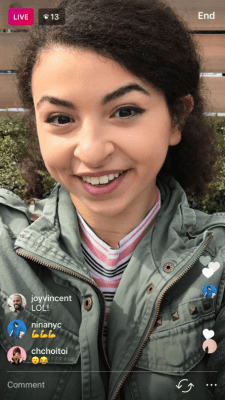 After you’ve completed a live video, you can either leave it on Instagram Stories and watch it disappear, or if it was really engaging and worth remembering later on, tap on the “Save” button in the upper right corner.

Only the video will be stored, not the comments, likes, number of viewers, or even the live interactions that take place. The video will be saved to your phone’s camera roll and you can then share it to Facebook, Twitter, YouTube, or anywhere else you’d like. But be warned: Instagram said that when you do so, the video “will no longer be available in the app,” so be careful when you retrieve it.

With the introduction of live video, perhaps the idea was to highlight things and events not necessarily worth memorable, at least in the long term. Maybe you wanted to record a parade, animals hanging out, you’re just bored one afternoon, or perhaps you’re a creative person and just want to show how you design something. With the proliferation of live video and stories into all Facebook properties, including WhatsApp, Messenger, and even the core Facebook app, the ephemeral functionality is intended to not only rip off more of Snapchat, but to appeal to users in different settings.

Instagram claims that this is the “first of many improvements” it plans on making to live videos this year. It did not specify how many people used live video or provide any updated numbers on Instagram Stories usage.

The save update is part of the latest release of Instagram for iOS and Android.