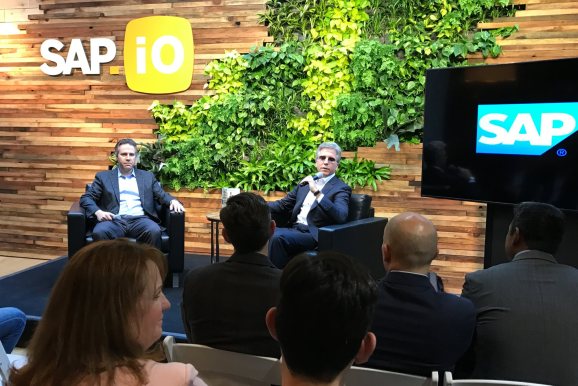 SAP CEO Bill McDermott speaks to startups, investors, and SAP staff at SAP.iO offices in San Francisco Wednesday ahead of the launch of the SAP.iO Fund

Enterprise software giant SAP launched the SAP.iO Fund today to invest tens of millions of dollars in startups making products that call upon SAP platforms, data, or APIs made by SAP.

Starting with an initial investment of $35 million, the fund will invest in dozens of enterprise startups in the coming years. SAP also plans to fund startup accelerators in tech capitals cities around the world, like San Francisco and Berlin.

Both the investment fund and accelerator programs will focus on machine learning, Internet of Things (IoT), and big data, according to SAP chief strategy officer Deepak Krishnamurthy.

SAP.iO Fund will invest in 10 to 15 companies in its first year, 25 to 30 the following year, and up to 50 in its third year, Krishnamurthy said.

Each seed round will come to roughly $250,000, with additional investment in Series A funding rounds. Applicants will be asked to leverage APIs from SAP Systems.

“We’re at this crossroad now where machine learning, artificial intelligence, the internet of everything, blockchain, the notion of all of these unbelievable market forces and opportunities are going to still require that core system,” SAP CEO Bill McDermott told a crowd at SAP.iO offices in San Francisco Wednesday. “It’s going to be that core system, the inter-enterprise transactions between buyers and sellers in efficient global networks, is ultimately how customers are going to fundamentally rethink business models.”

In addition to the investment fund, SAP.iO Foundry is a set of startup accelerators set to take place in Berlin, San Francisco, New York City, and Tel Aviv.

The Berlin and San Francisco accelerator programs will be held at SAP facilities, where startups will work alongside SAP intrapreneurs. The Berlin accelerator will be managed by TechStars, one of the first startup accelerators.

New York and Tel Aviv accelerators will be partnerships powered by the Junction in Tel Aviv and TechStars in New York.

Accelerator programs will last between 13 and 16 weeks.

“We want you to build your franchise and your dreams on our core business offering, and by doing that you can bring your imagination to the equation,” McDermott said. “As long as you’re authentic and you’re really running the software, we’ll put the full weight and power of SAP and all of our friends behind you and your idea.”

The first investment by the SAP.iO Fund is in Parable Sciences, a big data analytics company also known as Paradata.

“They’re very close to what we do from a supply chain and procurement perspective,” Krishnamurthy said.

SAP did not disclose the size of its investment in Parable Sciences.