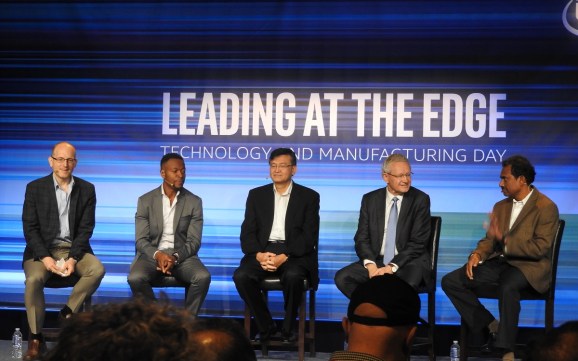 Intel’s push into the foundry business, or making chips for other companies, is increasingly taking it into the arms of traditional rivals.

The world’s biggest chip maker can invest as much as $10 billion in a single chip factory, and it has a vested interest in making sure that the factories stay fully optimized. Making chips for other companies ensures that the factories will stay busy. As the demand for Intel’s own chips made for the PC slows down, it makes sense for Intel to diversify and add more partners who can use the capacity of its chip factories.

That means Intel is working with ARM, which on the microprocessor side has been a rival of Intel’s for many years. ARM creates designs that Intel’s rivals use to create their products. But now ARM chips will soon be made in Intel’s factories. Intel talked a lot about thecost advantage it will have with its 10-nanometer manufacturing coming this year at an event in San Francisco. That production node will lead to a bigger foundry business later this year.

ARM is collaborating with Intel on a manufacturing technology, and it could be a compelling path for high-volume products, said Will Abbey, senior vice president of sales and strategic alliances at ARM.

“It’s unquestionable that Intel has great technology,” Abbey said. “An important thing in foundry is a customer-centric mindset. We’re pleased that as we’ve asked questions of Intel, Intel has responded very well.”

Abbey said that ARM has been pleasantly surprised at how Intel has openly worked with ARM to make sure that the chip design tools from third parties work properly with Intel manufacturing.

By the end of the year, Intel will have its first 10-nanometer manufacturing process in place. That will be used to make the chips for ARM’s customers.

“People will see if all of our work has been smoke and mirrors or if it is real,” Abbey said.

Aart de Geus, CEO of design software firm Synopsys, said that you don’t get a second chance to make a good impression on customers. He said that he was pleased with the things he heard from Intel today about its progress on 10-nm production. Not many companies have the ability to invest in advanced chip manufacturing tech, he said.

“We are going into an era where everything is smart,” de Geus said. “The cost is not at all the issue. We need computation that is 10 or 100 times better. So many parties have new ideas for software, if you can support them with the hardware, you will be in a good spot.”

Lip-Bu Tan, CEO of design tool maker Cadence Design Systems, said that any time a chip designer has to do a rework because of a hardware bug, it severely slows down a business. So he said working out those bugs early will be critical in the foundry market.

Zane Ball, an Intel vice president, said, “It takes the ecosystem coming together to make the foundry business successful. We only succeed when companies like yours work together.”

It makes for Intel to be in the foundry business in one respect. Ten years ago, there were 18 companies that built leading-edge factories. Today, there are only four.

David Kanter, analyst at Real World Tech and the Microprocessor Report, said in an interview that the challenge for Intel is that there are relatively few large customers that it doesn’t compete with. Nvidia uses TSMC, while Qualcomm uses Samsung. And because those design companies compete with Intel, they are not likely to use Intel’s foundry services.

Kanter said that the main target that Intel could target is Apple, which uses Samsung. That could generate a lot of business for Intel, if Apple builds its A series chips using Intel’s factories.