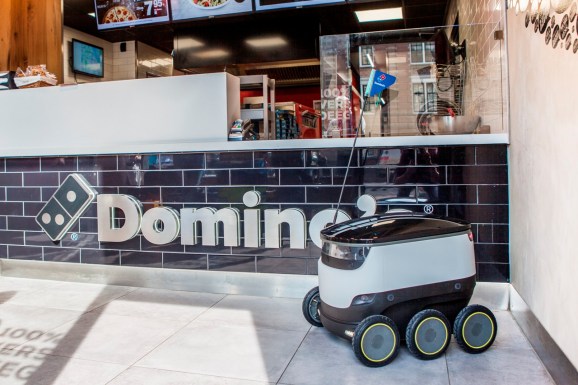 Pizza giant Domino’s is the latest company to jump on the drone-delivery bandwagon with the news that it has signed a deal with Starship Technologies, the robotics startup created by Skype’s founders.

Starship Technologies has been testing its robots across U.S. and European cities since late 2015, and it has already been trialing them with consumer companies, such as food-delivery firm Just Eat, which has been dispatching food to some customers in London for a few months.

Now, Domino’s has announced a pilot program in a handful of German and Dutch cities, where customers within a 1-mile radius of certain Domino’s stores will be greeted with a non-humanoid robot rather than a person on a bike.

The mini six-wheeled robot drives completely autonomously and sports 9 cameras, ultrasonic sensors with a 360-degree field of vision, and a 30cm braking distance. Should things go wrong, there are human operators monitoring things remotely who can step in.

This latest pilot follows a number of additional partnerships across North America and Europe, where Starship Technologies is also working with the likes of Postmates and DoorDash.

Today’s news comes just a few months after London-headquartered Starship Technologies, which was founded in 2014, raised its first notable outside funding — it grabbed $17.2 million from automotive giant Daimler, among a number of other VCs.

Robots are increasingly moving from science fiction into the real world. According to a World Economic Forum report from January, millions of jobs could be lost to robots and automation by the year 2020 as part of the “fourth industrial revolution,” and it’s looking increasingly likely that delivery drivers could be high on the target list.

This could also extend into the kitchen, where automation is starting to gain a foothold. In Silicon Valley, Zume Pizza is already operating a commercial kitchen where two robots apply the sauce to the dough while another spreads it, and a robotic arm then places the pizza in the oven. And just a few weeks back, “robots for restaurants” startup Chowbotics raised $5 million to help automate food prep.

The new pilot project is being operated by one of Domino’s biggest franchisee’s — Domino’s Pizza Enterprises, which runs 2,000 stores across seven markets — with specific oversight falling on its in-house Domino’s Robotic Unit (DRU).

“We are a global company and we are eager to progress innovative technology in all of the countries in which we operate –– we are very excited to be partnering with Starship as it brings regular deliveries by robot one step closer to commercial operations,” said Don Meij, Domino’s group CEO and managing director. “With our growth plans over the next five to 10 years, we simply won’t have enough delivery drivers if we do not look to add to our fleet through initiatives such as this.”

It is hard to believe that worker shortage is a genuine problem for Domino’s industry — if there is one thing major cities around the world don’t have, it’s a shortage of is people seeking part-time delivery work.