Microscopes used for life sciences exist in two configurations — either upright, typically used for glass slides, or inverted, to view live samples in petri dishes. Labs will usually have both for their research. In order to save them money and space, Echo has created Revolve, a hybrid microscope that switches from upright to inverted modes. The startup announced today funding of $7.5 million to scale its manufacturing of the new microscope.

In addition to the microscope’s dual function, Echo replaced the device’s traditional eyepieces with an iPad Pro for improved viewing. “Users engage with our proprietary iOS app to drive the Revolve, allowing them to easily capture, archive, and share images on a large Retina Display screen,” wrote Echo founder and CEO Eugene Cho in an email to VentureBeat.

The microscopes are manufactured and assembled by hand in Echo’s San Diego offices and cost between $18,000 to $40,000, depending on configuration. Traditional inverted and upright microscopes used in labs cost about the same, says Cho, meaning customers pay double to have two microscopes with separate functions. “With Revolve, we offer the capabilities of two instruments for the price of one,” he wrote. 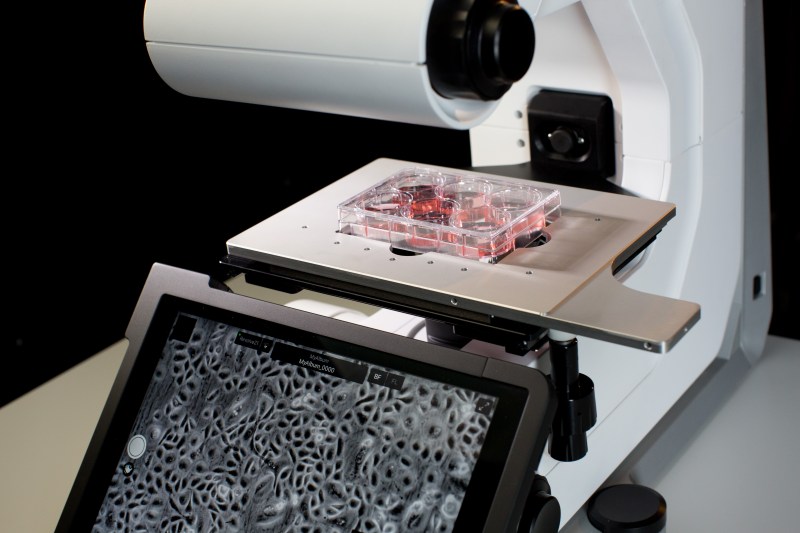 Above: The Revolve microscope

Current customers include Stanford University, University of California San Francisco, Harvard University, Pfizer, Novartis, and the National Institutes of Health, among others.

Optics, which are a crucial component of microscopy, are primarily developed by the big four of the microscopy industry: Zeiss, Olympus, Nikon, and Leica. Echo uses Olympus lenses.

Today’s investment was co-led by Dolby Family Ventures and Tech Coast Angels. The new capital will be used to scale the production of microscopes by automating the manufacturing process. It will also be used to grow sales infrastructures and develop future products, which will include a higher-end model with automation, as well as an entry-level model for the STEM schools marketplace, says Cho. Echo has raised a total of $12.5 million to date.

Founded in 2013, the startup currently has 22 employees.