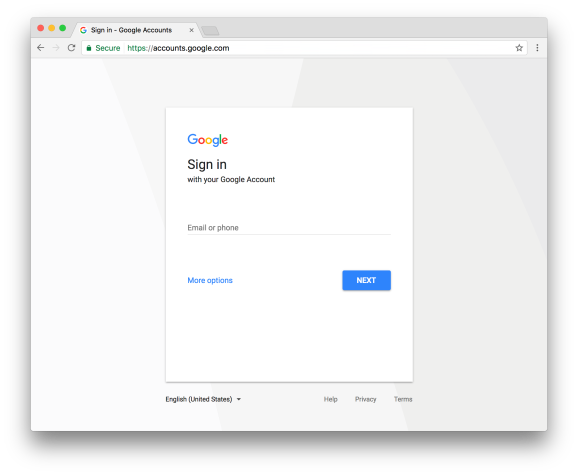 The new look for signing in to Google on the web, coming soon.

Google today confirmed that it has begun informing people about a redesign of the sign-in pages for its web services — like Gmail. Google will be drawing from the style of the user interface it uses for adding accounts on Android and using that for the sign-in experience in Chrome and other browsers.

People will still need to type in their email address or phone number and then their password — and then use any two-factor authentication system that they’ve previously enabled. So functionality will not change. But the experience will look different in a few weeks, Google product manager Rodrigo Paiva told VentureBeat in an interview. Google started showing people a notification about the change at the bottom of the sign-in screen yesterday to prevent users being surprised by the new look, Paiva said.

Google started using the new look at the operating-system level — through Settings > Accounts > Add Account > Google on Android, and through the Google App on iOS — a few months ago, and the company has been testing it in browsers internally in recent weeks, Paiva said.

The new system has a responsive design, meaning that its appearance will change based on screen size and orientation, and it will work on the mobile web and on desktop, Paiva said.

The change comes a few months after people were reported to be using a Google-like sign-in page for phishing attacks that could steal Google account holders’ passwords. That attack involved sending an innocuous-looking email with an attachment that, when clicked on, brought people to a fake sign-in page. But the page didn’t have the usual URL; instead, it had unusual characters at the beginning.

Google services like Gmail, Play, Search, and YouTube have more than 1 billion active users. So it does make sense that Google wants to be up front early on about any changes to the sign-in flow that many people have become accustomed to.

Update on April 3: Today Google formally announced the change, saying the new look will be rolling out starting on April 5.

Update on April 6: Google says it is delaying the introduction of the new look until April 10. Additionally the option to stay signed in will go away for some G Suite users, Google said in a blog post.