At the moment, flights are limited to just a few feet above the ground:

While Gravity hasn’t spun up the suit to its full capabilities just yet, that’s coming, says founder Richard Browning:

“The suit has enough power to achieve many hundred of miles per hour,” he said in an email. “But safety is the first priority. We have developed the suit to be reliable, stable, and highly capable at low altitude, running pace speed and able to execute precise maneuvers. However, we are rapidly developing every aspect of the system toward some extraordinary, audacious goals.”

While we’ve seen tethered water-powered jetpacks and massive shoulder-mounted jet-powered flying suits, we haven’t seen anything like the foot- and hand-powered flight of Iron Man’s fictional Tony Stark, who directs flight via jets in his iron suit’s feet and palms. The Gravity production isn’t exactly like Iron Man, but it is a lot smaller than previous jetpack systems. Plus, it is attached to the pilot’s arms, and — in some iterations — feet.

Gravity says the human body is “the airframe” and that your arms and legs serve to both direct and control thrust. 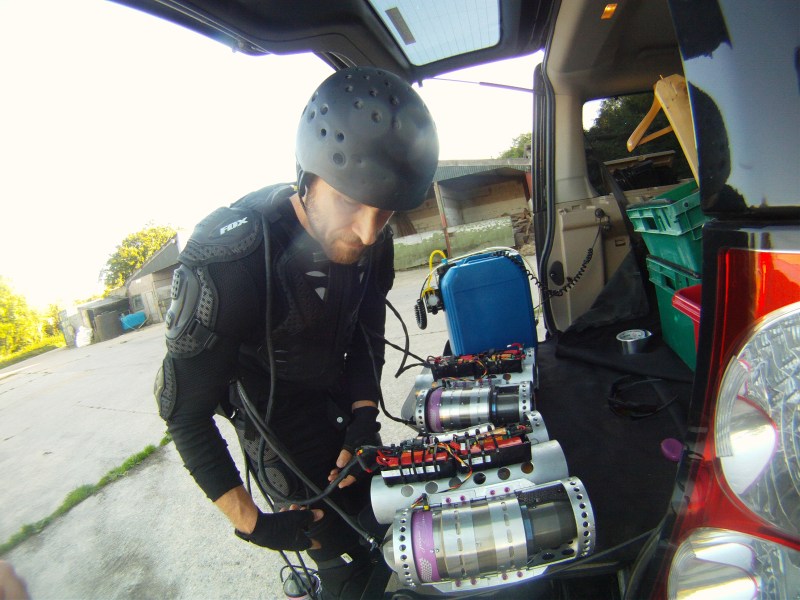 Browning says that he’s serious about real-world innovation here and has plans to extend the suit’s applications well beyond the movies, or the company’s early tie-up with Red Bull.

“We’ve already had a few comparisons to Tony Stark, but this is real-world aeronautical innovation,” Browning said in a statement. “We are serious about building a world-changing technology business. We stand at the very beginning of what human propulsion systems will do.”

The full suit, visible at the end of the company’s demo video above, incorporates a sunglasses-style heads-up display that tells the pilot how much fuel he or she has left, as well as a variety of safety and performance indicators. It also incorporates Wi-Fi for ground monitoring and data streaming.

And, presumably, for live-streaming your rocket flight to Facebook.