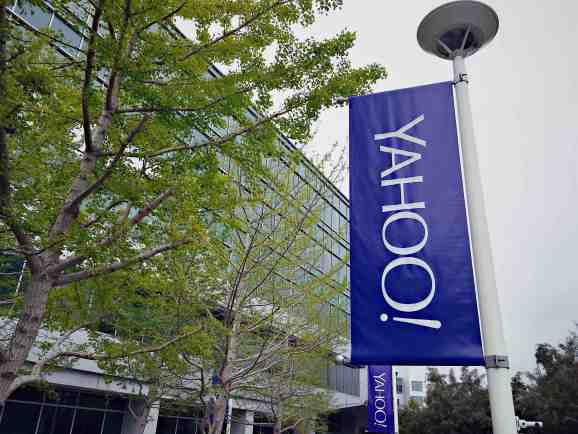 Signage hanging along the courtyard at Yahoo's headquarters in Sunnyvale, Calif.

When the acquisition of Yahoo by Verizon concludes later this year, the storied Yahoo name will be no more. Instead, the core assets of the search engine company will be merged with AOL to become a new entity known as Oath. The official rebranding takes place this summer.

First reported by Business Insider, the new brand was confirmed in a tweet by AOL’s chief executive Tim Armstrong this afternoon. Some details he did share was that under Oath, it would have more than a billion consumers and stretch across more than 20 brands. The rationale for the name and why Verizon is bundling up legacy brands AOL and Yahoo are unclear, but hopefully this summer we’ll be provided additional information.

A source familiar with the matter told VentureBeat that the Yahoo brand will continue to live on.

In July, Verizon announced its purchase of Yahoo for $4.8 billion, picking up core assets like mail, finance, search, and more. What wasn’t included in the price was Yahoo’s holdings in Yahoo Japan and Alibaba. That will remain in a holding company that’s called Altaba, previously known as Abaco. The acquisition of Yahoo hasn’t exactly been smooth sailing, with multiple revelations of state-sponsored hacking that compromised billions of user accounts — Verizon has since won a $350 million discount for Yahoo.

With the revelations of Oath, it doesn’t seem likely that Armstrong or current Yahoo CEO Marissa Mayer will be helming the new company. Reports suggest that AOL executive vice president Marni Walden will be the one to lead it. We already know that Mayer is on the outs at Altaba and is stepping away from the board, but will she stick around and be a part of the Verizon family? And what will happen to Armstrong? Will he join Uber to be its chief operating officer, as some suspect he’s in the running for?

When initially reached for comment, Yahoo demurred, but an AOL spokesperson provided VentureBeat with a statement: “In the summer of 2017, you can bet we will be launching one of the most disruptive brand companies in digital.”

There are many outstanding questions left on the table: What will happen to Yahoo Mail, Finance, Weather, and a bevy of tools millions of people use? Will the Oath moniker be affixed to these products? To be honest, Oath Mail doesn’t really have a ring to it.

Yahoo Finance said that the media brands are not going to be impacted by this rebrand and will remain the ones that we all have come to know. Some have suggested that the move to Oath is intended to win over advertisers, so the new name could be a matter of organization instead of something that impacts the end user.