Augmented reality can help you find your lost wallet, and more.

Pixie Technology has a way to find your lost wallet or misplaced keys. It uses a combination of tracking chips, which the company dubbed the “location of things,” along with augmented reality technology.

Los Altos, Calif.-based Pixie sells Bluetooth LE-connected fobs that create a connection with each other. When you are holding a fob, such as the one attached to your smartphone, it establishes a connection to the nearby fob. And then it uses the location information to guide you to the other fob.

That’s where the AR technology comes in. You turn on the Pixie app on your smartphone and point your smartphone camera in a particular direction. If you are within range of another fob, you can see it appear on your camera screen as a digital overlay on the camera’s view. If you move closer, you can home in on the lost item. 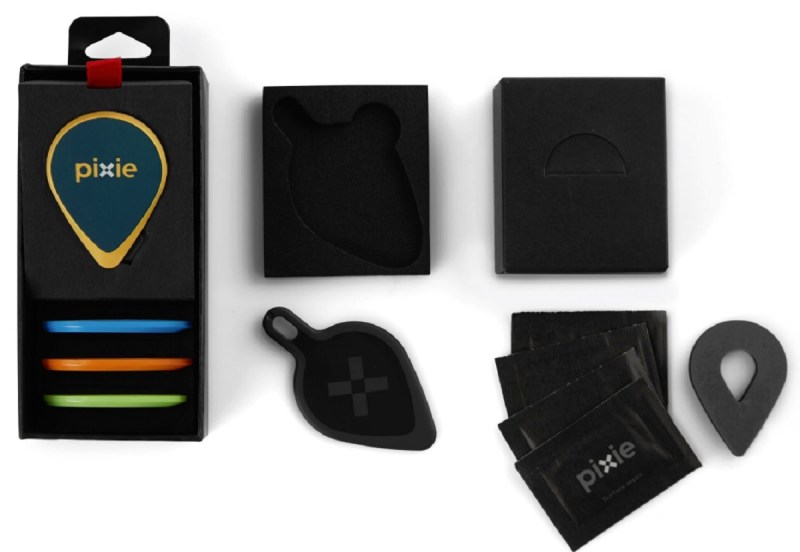 Above: A full kit of Pixie Points.

If the item is out of range, Pixie will show the street address, time, and date of when it was last seen by the app.

The location of things could be an important cousin of the Internet of Things, or making everyday objects smart and connected, said Amir Bassan-Eskenazi, CEO and cofounder of Pixie, in an interview with VentureBeat. Each Pixie Point is like a “location pin for the real world,” he said.

“I was trying to find a smart location solution, and I didn’t find one,” Bassan-Eskenazi said. “I thought about it, and so I started to create one. People thought of lost keys as a hardship, a fact of life you have to live with. I thought of it as a problem that you can solve.”

Pixie raised $18.5 million last year in a second round of funding led by Spark Capital, with participation from Cedar Fund, Our Crowd, and private investors. Bassan-Eskenazi cofounded the company with Ofer Friedman, chief technology officer, in 2011. A pack of four Pixie Points costs $100.

Pixie uses mesh networking technology to enhance the precision and expand the range of its location-based fobs. Mesh networking allows devices on a network to talk to each other, rather than relying on a central hub (e.g. a mobile phone). Through triangulation, Pixie provides a more exact location of your lost items, Bassan-Eskenazi said.

“It’s like a compass,” he explained. “Instead of pointing to the north, it points to what you are looking for. You see on the map where you are and where it is.”

Rivals include Tile and Trackr. The Pixie Points are about an inch long (47 millimeters x 35 mm x 3.4 mm), which makes them a little bulky to put on your keychain, smartphone, or in your wallet. But it can give you peace of mind that you’ll be able to find your lost item if needed.

There are a couple of ways to locate things. With a motion similar to taking a panoramic photo, a simple scan of the room maps the immediate environment and triangulates Pixified items’ positions relative to the user. 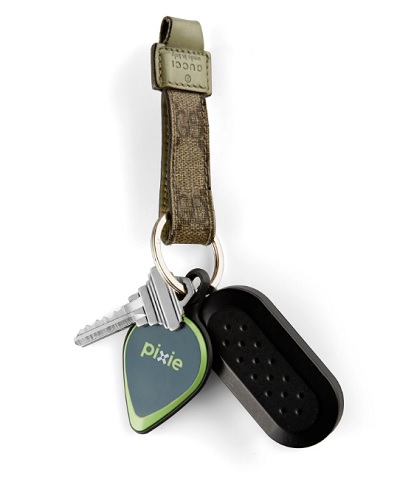 Above: Pixie Points can be attached to your keys.

Or the Pixie app can point a user to the location of the item with the Pixie Pointer, an arrow icon that shows both the direction to move in and the current distance from the object. And if you press the “show me” button, Pixie displays an AR overlay consisting of Pixie Dust that swarms to a part of a camera picture where the item is in the room.  The Pixie Dust and Pointer can even see through walls and objects to guide users to items that are hiding behind a cushion, in a drawer, or in an adjoining room.

Once users are within five feet of the lost item, the Pixie app acts like a metal detector to accurately zero in on the target. During this stage, the Pixie app provides visual and audio guidance to tell users as they are getting closer or farther away from the exact location of the object.

The range is about 150 feet outdoors, while it’s about 30 to 50 feet indoors. The Pixie Points include a Bluetooth LE radio, proprietary Pixel signaling protocols that allow each Pixie Point to communicate with any other using the 2.4 gigahertz band, and distance sensors utilizing UWB PHY in the 4 gigahertz range. The latter uses two-way Time of Flight (ToF) measurement for high-accuracy indoor ranging.

The finder is accurate to about one foot. The non-replaceable battery lasts about 12 months and the device runs on iOS 9 and up and supports iPhone 7, iPhone 7+, iPhone 6s and 6s+, and the iPhone SE and 5S. Pixie has filed for 10 patents. Pixie Technology plans to open its location-of-things platform to developers and partners in 2017. To date, the company has raised $24 million.